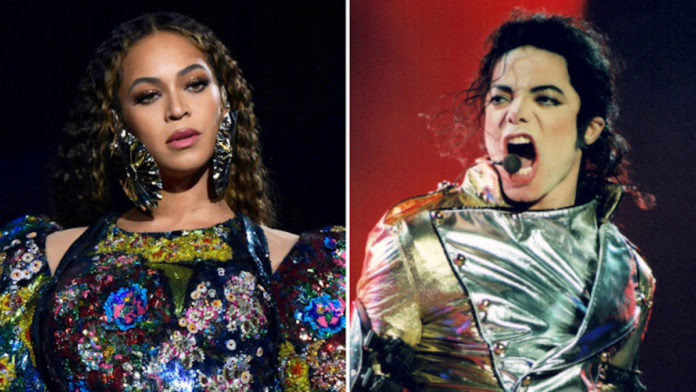 Not many artists can say they’ve had 40 Top 40 hits! So far Michael Jackson is one, but you can now add Miss Beyonce Knowles Carter to that list. With the release of “Black Parade” the Queen Bey herself now ties with the King of Pop for having 40 songs debut in the top 40 of Billboards Hot 100 List.

Released during such a critical time in our society, “Black Parade” has garnered the attention of many. The song was the top selling track in the US during the week of its debut, with over 18,000 downloads and over 7.8 million clicks/streams. Since its release. it has been climbing the Digital Song Sales charts all the way to number 1. This marks Beyonce’s 9th #1 hit since the charts inception in 2004.

Since 1958, Billboard has been charting and tracking music popularity and birthed the Hot 100 list. Since it’s inception, Michael Jackson has been the only male artist to top the charts with over 40 number 1 hit tracks. With these new milestones, Beyonce now ties with Michael Jackson with the most popular top 40 hits. The two are also one of the few artists to be a part of the Hot 100 Triple Decade club, Michael with music hits in the 70s, 80s, 90s, and Beyonce taking over for the 90s, 2000’s and the 10’s. If there is a Quadruple decade club, we are sure Beyonce will find herself in it.

The comparisons between these two super stars are endless. They both started in groups, and made their music debut at a young age. They’ve had chart topping hits since they were young and continued to make hits in their solo career. They have created songs that make us feel good, make us cry, and speak to the times we are going through. Their music is timeless because it represents so many aspects of our culture from the sound to the lyrics to the music videos. They were innovative, provocative, and creative in all aspects of their art. It is a beautiful thing to see their music still touching hearts around the world for years.

So who’s your favorite chart topping super star; Michael Jackson or Beyonce? Can’t choose? Us either. So let’s just watch Beyonce sing Michael songs and call it a tie shall we?!