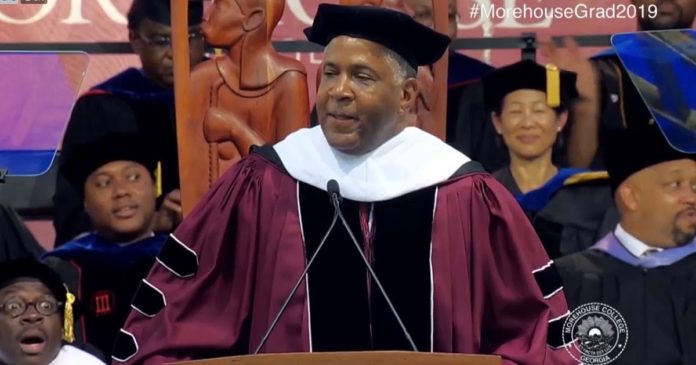 It was a good day for the 396 men who were graduating from Morehouse College! Having Robert F. Smith, who founded Vista Equity Partners, as their commencement speaker to wish them a bright future they had no idea of the news that was coming their way. The Morehouse Alumni went off script of his speech and announced that he was freeing the 2019 graduating class of Morehouse of their student loans. That’s right! No more student loans for these students.

With the talks of student loans being over the charts in America, this couldn’t have come at a better time. New York Times quoted from Smith during his speech,

“This is my class, 2019 … and my family is making a grant to eliminate their student loans”

After this announcement the crowd yelled in excitement, as they hugged one another and shook each other hands. New York Times also quoted from the Morehouse president David A.Thomas,

“This was a liberation gift, meaning this frees these young men from having to make their career decisions based on their debt.” Thomas also stated that he will be meeting with Robert Smith for the grant details.

Robert F. Smith is known for making huge investments and donations. New York Time stated that his donations to school systems are inspired by his mother who would send $25 checks each month to a United Negro College Fund all throughout his childhood. Congratulations to these men and on their future success that they will endure!