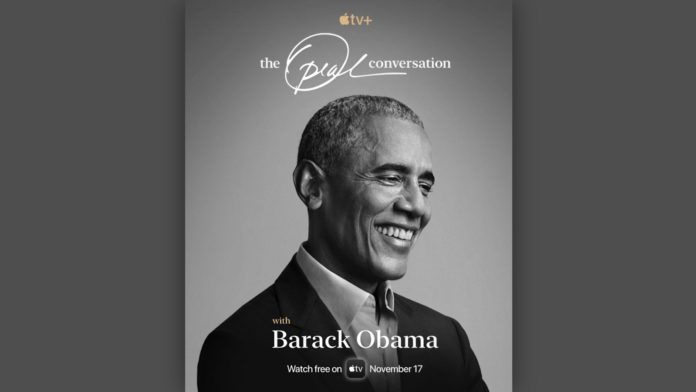 Former President Barack Obama sat down with Oprah Winfrey for a wide-ranging conversation regarding topics discussed in his upcoming memoir, ‘A Promised Land.’

‘A Promise Land‘ is a personal, intimate account of the historic presidency of Barack Obama. In the first volume of his presidential memoirs, Obama takes readers on a compelling journey from his early years in politics to becoming the first African American President of the United States. In this memoir, Obama brings readers to the darkest and brightest days of his presidency. Through his words, readers journey through various rooms and situations as they unfold in the White House.

Oprah Winfrey refers to Obama’s new memoir as “worth the wait.”

The talk show host continues, “Everybody who reads it is going to be on this journey from the grueling and monotonous grind of the campaign, to taking us inside the Oval Office and the Cabinet Room and the Situation Room and sometimes, even the bedroom. This book has both the intimacy and the grandeur coming through in this memoir, and I have so been looking forward to speaking about all of it.”

During their conversation, Obama discusses his inner battle with his own vanity and ego while on his presidential campaign.

“What I found was that seeing your name up in lights, being on television, speaking to large crowds et cetera -after a while, like anything else, you become accustomed to it,” he explains to Oprah. “And what lingers, what lasts what matters is your own assessment of, ‘What good am I doing?”

He continued explaining that by the time he entered his presidency, the vain part of service no longer interested him.

During his conversation with Oprah, the former president holds nothing back. He reflects on what he refers to as one of the “saddest” and “angriest” days of his presidency, the Sandy Hook Shooting. The Sandy Hook shooting took place on Dec. 14, 2012, when an armed gunman entered Sandy Hook Elementary School shooting and killing 20 children and six educators.

“I was disgusted and appalled by the inaction (of Congres)” he said “Because you had parents who had just lost their children sitting in front of senators and asking them for very modest, reasonable approaches. This wasn’t some radical agenda. They were asking for more effective background checks and other provisions to keep firearms out of the hands of disturbed folks.”

He continued stating, “It was all viewed as politics instead of this human moment that should’ve been able to respond to as a society.”

Their full conversation will debut Tuesday, Nov. 17th on Apple TV, as a part of the Oprah Conversation. Which is the same day the memoir will be released to purchase.