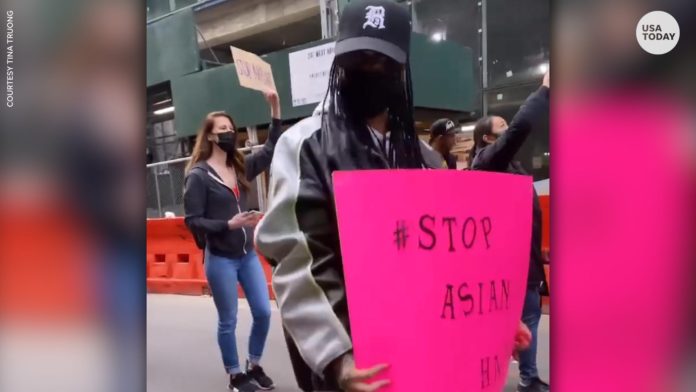 The Fenty mogul kept a low profile while at the rally, sporting long braids, a black face mask, a baseball cap, and oversized shades. The singer attended the rally with her assistant Tina Truong, who shared their experience on Instagram.

“This is what solidarity looks like! #stopaapihate #stopasianhate #callitahatecrime,” Troung writes.

Troung shared a series of photos and videos from the rally, including Rihanna holding up a sign that reads, “Stop Asian Hate.” Along with a photo of the international singer is a video of her dancing in the streets while marching at the rally.

Later Troung shared of video of the Grammy-winning artist giving her Instagram handle to another rally attendee.

Troung captioned the video, “When Rih gives you her IG handle but you think she’s trolling.”

In the video, Rihanna is seen giving her social media handle to a protestor. Once clicking on the page, the protestor stops and asks the singer, “that’s you?.” The singer replies by laughing.

Rihanna giving her Instagram handle to protesters at the #StopAsianHate march in NYC. pic.twitter.com/3g4uG7PPs3

Rallies supporting the Asian community have spread through the nation, including Atlanta, Pittsburgh, New York City, and Chicago.