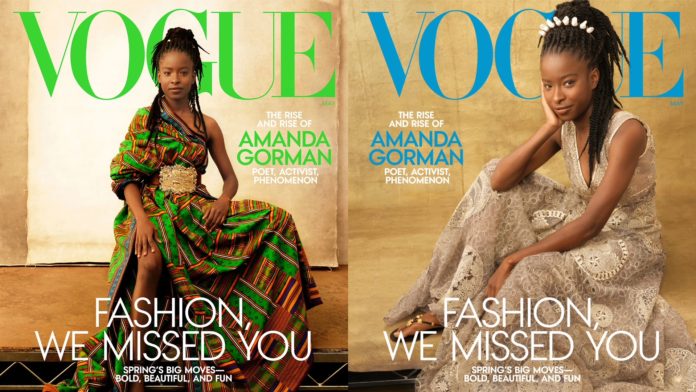 Poet Amanda Gorman caught the nation’s attention after her inauguration poem “The Hill We Climb,” the 23-year-old poet is now the cover image on Vogue magazine’s May edition.

Vogue unveiled the cover on social media, referring to Gorman as “so much more than a literary star.”

.@TheAmandaGorman is our May cover star!

Poet, activist, optimist, style icon—Gorman has become so much more than a literary star. Meet the phenomenon in the making: https://t.co/7Zkxcy0i4q pic.twitter.com/mbjacqdlOt

While speaking with Vogue, Gorman details her long journey to her stardom.

“It took so much labor, not only on behalf of me,” Gorman begins. “But also my family and of my village, to get here.”

The poet dote over the oratorical styles of Revs. Ralph Abernathy and Martin Luther King, describing their word delivery.

“The way they let their words roll and gain momentum is its own type of sound tradition.”

During the interview, the 23-year-old Harvard graduate explains her role as a “role model.” She says that so far she has turned down an estimated $17 million in endorsements, and she only seeks deals that highlight her future goals. Gorman explains that she hopes to run for president in 2036. She also hopes her success doesn’t become a tokenism for the Black idenity.

“I don’t want it to be something that becomes a cage, where to be a successful Black girl, you have to be Amanda Gorman and go to Harvard,” she explains. “I want someone to eventually disrupt the model I have established.”

“I’ve learned that it’s OK to be afraid,” she says. “And what’s more, it OK to seek greatness.”

“That does not make me a black hole seeking attention, it makes me a supernova.”

This fall, Gorman is set to release two books this fall, her debut poetry collection “The Hill We Climb” and a children’s book “Change Sings.” Although these two books have yet to hit the shelves, shortly following her inauguration poem in January, Gorman made the best sellers list.

I AM ON THE FLOOR MY BOOKS ARE #1 & #2 ON AMAZON AFTER 1 DAY! Thank you so much to everyone for supporting me and my words. As Yeats put it: “For words alone are certain good: Sing, then”