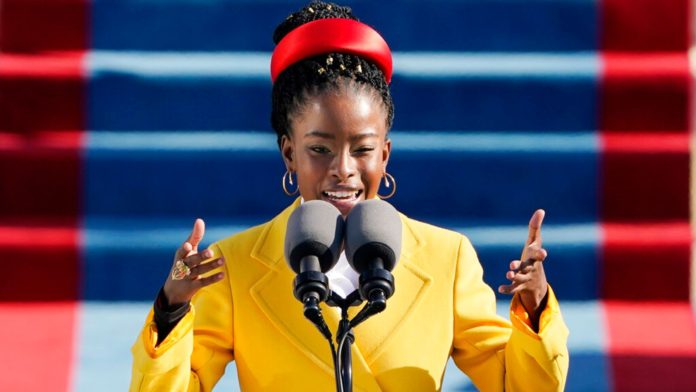 The young poet encourages Americans to “leave behind a country better than the one we were left.” in her inauguration poem.

Gorman was born and raised in Los Angeles by a single-mother and 6th-grade English teacher. According to CNN, Gorman started writing poems when she was a child, but found it terrifying to perform due to a speech impediment. She overcame that fear by drawing confidence from former President Barack Obama and Martin Luther King Jr., and practices songs from the Broadway musical “Hamilton.”

Gorman uses her poem ‘The Hill We Climb” to express her upbringing ultimately bringing her to this very moment. “Somehow we’ve weathered and witnessed a nation that isn’t broken, but simply unfinished. We, the successors of a country and a time where a skinny Black girl descended from slaves and raised by a single mother can dream of becoming President, only to find herself reciting for one,” quoted from her poem.

With the violent events we’ve encountered throughout the year, and ending things with the attack on the US capitol it’s only right to acknowledge the need for social change.

“We are striving to forge our union with purpose. To compose a country committed to all cultures, colors, characters and conditions of man,” Gorman said. “And so we lift our gaze, not to what stands between us, but what stands before us. We close the divide because we know to put our future first, we must first put our differences aside. We lay down our arms so we can reach out our arms to one another. We seek harm to none and harmony for all.” “The new dawn blooms as we free it,” she concluded the poem. “For there is always light, if only we’re brave enough to see it, if only we’re brave enough to be it.”

Interestingly enough, Gorman says she was halfway through writing the inauguration poem when she saw the Capitol riot, and she said she would attempt to “communicate a message of joining together and crossing divides.”