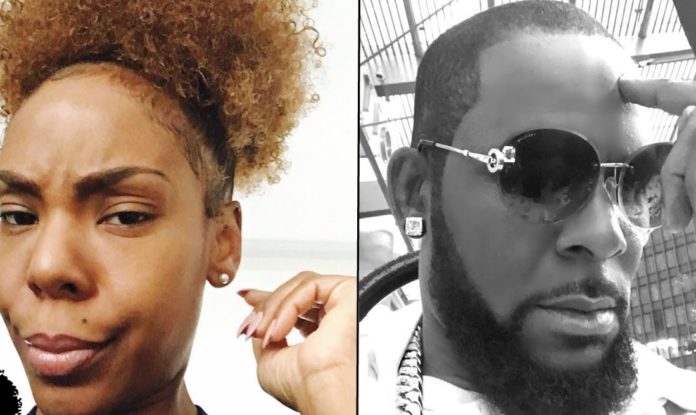 On Monday, R. Kelly released a 19-minute song titled I Admit, in which the singer addressed the sexual misconduct claims levelled against him. The following day, in what amounts to a kind-of rebuttal, Kelly’s ex-wife Andrea Kelly posted lyrics to her own personal remix of the song on her Instagram account. She accuses the R&B singer of abuse, disappointing his late mother and neglecting his children.
In Andrea’s remix, titled Admit It, she says that Kelly’s mother is looking down on him in disappointment. “And rolling over in her grave because of the ABUSIVE things you do / You say she’s looking down from heaven So there’s nothing she didn’t see / Which means she saw you BEAT me from heaven and neglect her grand babies……Admit it,” Andrea writes. Kelly also mentions his mother, Joanne Kelly, in his song I Admit. He suggests he wouldn’t do anything that would disappoint her.
“For nothing, for no one, nada, mama, Joanne, is watching / She must be turning over in her grave / Listen to heaven, just stay on my grind, and that’s 24/7/ And I know my mama Joanne is smiling down on me,” he sings. Andrea, who shares three children with the singer, suggests Kelly is a “dead beat dad” in her version of the song.
“Your children you don’t see / Because you treat them like your fans / And not your flesh and blood, please / Being a dead beat dad is a conscious choice / You could facetime w them EVERYDAY / they’d SEE your face and HEAR your voice,so….. / Admit it,” she writes. Andrea, who was married to Kelly from 1996-2009, revealed details about her marriage on July 11 in an interview with Sister Circle.
She told the hosts of the daytime talk show that Kelly abused her throughout their 13-year marriage.
“My truth is, Robert, you don’t get to tell my story. That is my truth. You should have never put me in your book,” she said, addressing claims the singer made about her in his 2013 memoir Soulacoaster. Andrea continued: “And if you’re going to put me in your book, then you’re going to tell the truth in the book. You don’t get to tell people that we got divorced because I had a problem with being a stay-at-home mom. We got divorced because I was no longer going to sit and be violated. What he did to me was criminal.”
She described the day she walked away from the marriage, saying, “That day I just remember playing sick all day. And I went and I got in the bed. And I was like, ‘OK, what are you going to do? What are you going to do?’ And something just said end it.”
Andrea said that was her first answer and she recalls going out on the balcony of the hotel room she was sharing with Kelly and she climbed up on the railing with one foot against the wall and the other over the ledge.
“I remember looking down. And it was almost like God was able to let me see in the future. I saw my body laying in blood and I saw the ambulance come and I saw housekeeping coming out and they were pointing up saying ‘She jumped from up there.’ And then I remember my babies voice in the background going, ‘Mamma, mamma! Why did mamma jump? Why did mamma leave us?” a tearful Andrea revealed. She said she stepped back from the ledge and begged God to give her a sign. She said that a voice told her to grab her laptop and “put in domestic violence.”
Andrea said that she found a questionnaire with 17 questions about abuse on a domestic violence website.
“Of the 17, Robert had done 15 to me,” she said.