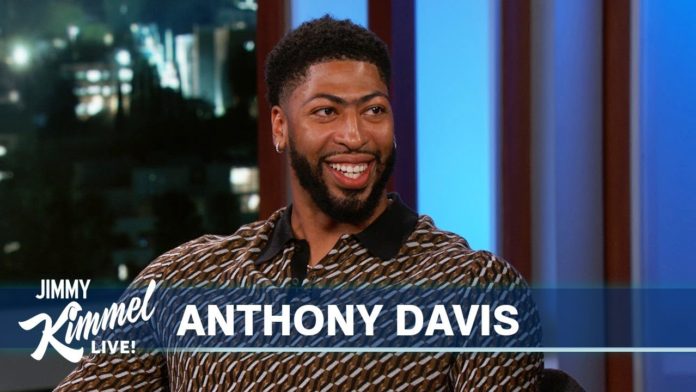 The new Los Angeles Lakers player Anthony Davis recently stopped by Jimmy Kimmel to discuss a few exciting things that are coming up in the future. With the exciting news of him being trading to the Lakers and being a team mate to championship player Lebron James, life seems to be going really well for Anthony Davis. He discussed Lebron James, Space Jam 2, and the most anticipated question.. how did he find out he was traded to the Los Angeles Lakers?

“How did you find out .. like how did you get the news that you’ve been traded to the Lakers?” Kimmel asked the ball player

Davis began to elaborate that he was in Malibu at the time, watching a movie. His manager was blowing up his phone, “and when I’m watching movies I don’t really like being interrupted.” Anthony continues his story by saying after rejecting his manager’s call twice, he picked up after a third time because he figured it had to be something really important. After finally picking up his manager’s call, his manager excitedly told Anthony that he has been traded to the Los Angeles Lakers.

“I’m like wait I haven’t heard anything about this. So, me being a 26 year old.. I go to Instagram. I go on Instagram, I’m looking and it was kind of everywhere so I figured it was true”.

Jimmy than jumped into the conversation of discussing Lebron James, asking when did he hear from the champion NBA ball player after receiving the great news.

“Um maybe like 10 minutes afterwards or 15 minutes” Davis said with a smile, and explained how much excitement Lebron showed for Davis’s trade. Anthony then said that Lebron gave Anthony his jersey number, 23. But unfortunately that was not able to happen. “A lot of stuff happen with the rules and everything and so I couldn’t get 23” said Davis.

Davis also states that he will be in the sequel to the hit 90s movie, Space Jam. He explains how he really only wants to do cameos in the film,

Watch the full interview down below.