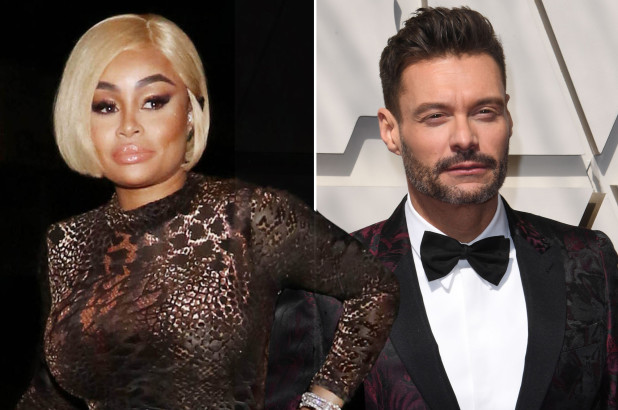 Ryan Seacrest who was the executive producer for Keeping Up with the Kardashians has repeatedly told reality star  Angela “Blac Chyna” White that he does not have any correlation to her case against the Kardashians. One of Blac Chyna’s attorney’s Lynne Ciani, plans to ask Mr. Seacrest about his December 14, 2016 congratulatory Tweet. The tweet was to Robert Kardashian regarding his now canceled with his ex fiance reality show “Rob & Chyna” for being placed for a second season. According to Radar Magazine “Chyna’s legal team wants to get to the bottom of what the E! Producer knew about the scheme the sisters allegedly hatched to push the Rob & Chyna show off the air and replace it with The Life of Kylie.”

According Ryan Seacrest’s legal team, they fail to see how that single tweet connects him to being involved in the show’s ending. They also argue that Chyna’s repeated attempts to trying to  attach him to this case is an attempt to harass and burden him.

Chyna continues to build her case on emails made between Kylie Jenner and sister Khloe Kardashian. US Weekly reports the conversation between the two sisters that were released in December 2018,  “the sisters corresponded about ending Rob & Chyna. “I feel very strongly about canceling Season 2 of Rob&Chyna,” the Lip Kit mogul (Kylie Jenner) wrote in December 2016. “The only reason Chyna wants to be with my brother is for this show. She does not love Rob and their relationship is too fake and destructive.”

The Good American cofounder (Khloe Kardashian) added that she and her sisters were “even considering not moving forward” with Keeping Up With the Kardashians if Rob & Chyna continued filming.

This case is currently on-going, Ryan Seacrest strongly feels like he should not be involved with this case. He even feels like it’s a waste of his time. Mr. Seacrest even wants Blac Chyna to issue him over $2,460 for his troubles.

H.E.R. named ‘Songwriter of the Year’ at the 3rd Annual Apple Music Awards

Apple has announced the winners of the third annual Apple Music Awards, which recognize the best artists of 2021 and their influence on global culture. According...

On Monday the official festivities marking the island of Barbados historic transition into a republic. The celebration took place at National Heroes...