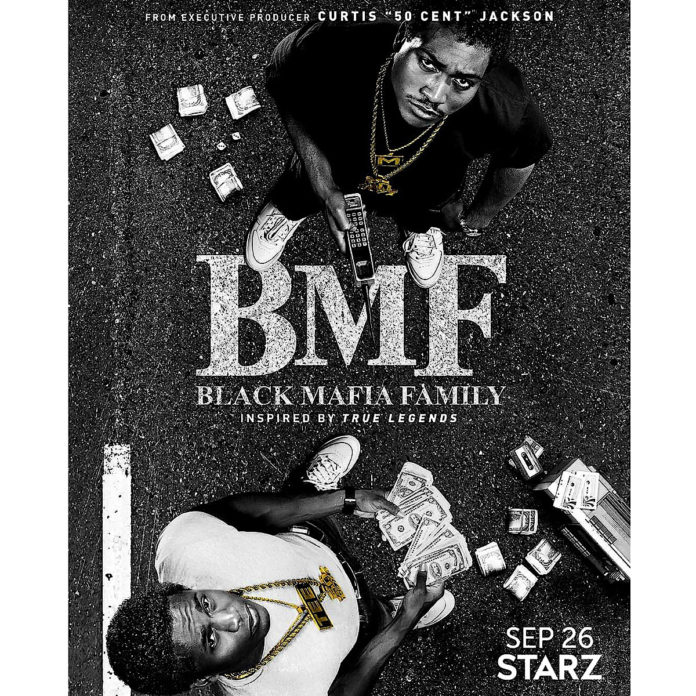 The Black Mafia Family (BMF) has an important story to tell the public. Starz has released the first trailer for ‘BMF’, the latest series from producer and story teller 50 Cent and executive producer Randy Huggins. In this series we follow the lives of Detroit brothers Demetrius “Big Meech” (played by his son, Demetrious “Lil Meech” Flenory Jr.) and Terry Flenory “Southwest T” (played by ‘Grown-ish’ star Da’Vinchi) as they become powerful figures in a multi-state drug and money laundering organization. We watch the progression as they tell the real life stories of how these men went from small-time dealers to the founders of one of the country’s most powerful crime families.

“Power is fictional,” 50 Cent said at promotion panel for BMF when comparing it to Starz’s highest-rated series ever. “This is a true story, a completely different project. BMF is an organically bigger version of Power. I have constantly said it will outperform Power.”

We will see an all star cast of Russell Hornsby, Wood Harris, La La Anthony, Snoop Dogg, and Eminem who will play Richard Wershe Jr., a.k.a. White Boy Rick. JaGurl TV sat down with the lead actors Demetrius ‘Lil Meech’ Flenory Jr, Da’Vinichi along with Randy Huggins to get a better insight of the importance of telling this story.

In addition to being the executive producer, Huggins also contributed to the writing and creative direction of the series. This seems like the perfect man for the job as he is from Detroit himself. “I heard about BMF when I was teaching third grade and fifth grade” Huggins shared. “Southwest Detroit is its own area so I didn’t go over there that much. I actually think that’s what was part of their evolution the way they [BMF] came as big as they became.” They grew up and learned how to navigate in a tough city like Detroit, which gave the brothers the tools they needed to take over the nation.

Lil Meech stepped up to take on the role to play his own father, Big Meech. He didn’t really understand the legacy of his father until he grew older and could understand the reasoning behind most of his father’s decisions. “It was never a certain time where he was like alright now I’m gonna tell you. He just was a funny cool ass dad. I just used to remember being with him, and then when he got locked up and I went to jail to go visit him the first time I seen him behind bars it was emotional,” Lil Meech told JaGurl TV as he opened up about his own experience. “When I started going back more frequently to go see him he would get more comfortable and he just started telling me stories.”

Lil Meech explained that he couldn’t believe the stories he was hearing. “It didn’t even sound real,” he explained. With this information he began to do his own research through documentaries and talking to close people in his dad’s circle. What solidified everything for his was the conversations he had with his own grandmother. “Then talking to my grandma, his mom, who loves his so much but in the series you can actually see the problems they faced. His mother loved him so much but she couldn’t take the fact that they can harm themselves by being in the streets. But my dad jut couldn’t have let them be poor and suffer in poverty.”

Coming from the hit tv series “All American”, Da’Vinichi has to ‘get out of his own way’ to tap into his character. “The character stripped me from a lot of things that were myself” Da’Vinichi explains, “I just was being stripped from my identity so it was alot, you know, just having that”, he continued “you know I just really embodied the character and the story.”

The first episode with premiere exclusively with Starz on September 26, 2021. Prepare yourself by watching the full trailer below:

Watch the full interview with JaGurl TV below.