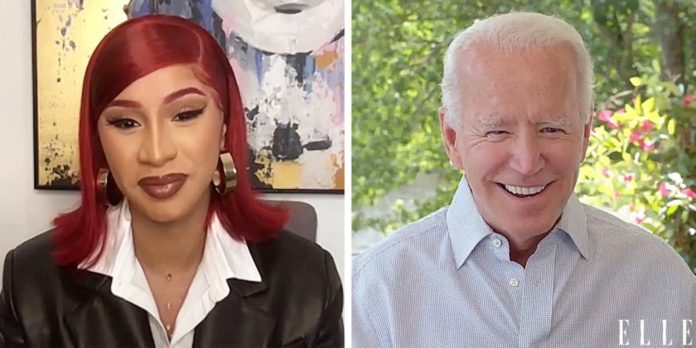 27-year-old rapper, Cardi B has always been the voice of the people. Instead of using her platform to spread hate and negativity, she uses it to spread knowledge to her viewers. Her unapologetic open mind has always been a staple in her personality, especially when it comes to political issues.

Cardi B has never been ashamed to point out the misfits in the United States government. With the 2020 elections quickly approaching, now more than ever Cardi is giving people the resources they need to make an educated decisions at the polls in November.

To start off, the “WAP” singer first addressed her distrust of current president and 2020 Republican nominee, Donald Trump. “I have a whole list of things that I want, and I wish, and I desire for our next president who’s for us. But first things first let me keep it a buck, I just want Trump out.” She expressed her distrust comes from a list of bad behaviors from his problematic rants on Twitter to his handling of the Covid-19 pandemic.

Cardi continued going through her list of requirements by stating, “Also, I of corse want free medicare. And this is why it is important to have free medicare because look what’s happening right now. See why we should have been had free medicare for a long time? I of corse think we need free college education, and I want black people to stop getting killed and no justice for it. I’m tired of it, I’m tired of it! I just want stricter laws that are fair to black citizens.”

Before Biden tackled the issues he stated the facts on the importances of going out to vote. “In 2016, if 18-24 year olds have voted in the same percentage as the rest of the population we would have had Hilary Clinton and not him. The vote matters, that’s why you keep talking to people about the need to vote.”

Biden also complimented Cardi on her passion for others and what she is doing in regards to the charity she does for her community (with a focus on millennials). “The reason I am so optimistic is because of your generation. You’re the smartest, the best educated, the least predigests, and the most engaging generation in American history and you’re going to change things. You’re the reason I have so much hope”

77-year old former vice president then turned his comments to Trump. “He’s promoting hatred, prejudice, racism. Talking about protecting the Confederate flag when Mississippi takes it off their flag. This is all about the game of making people hate each other. Because that’s how he wins, by dividing us,” he said.

Both parties seemed to relate and agree on the same topics. Cardi then wanted to ensure he’ll be able to deliver on these campaign agendas to which Biden promised, “I’ll make mistakes as president but ill admit to the mistakes I make and you’ll never have to wonder if I can keep my word.”