Home Headline Cardi B met with Bernie Sanders: Together Let’s build a Movement of... 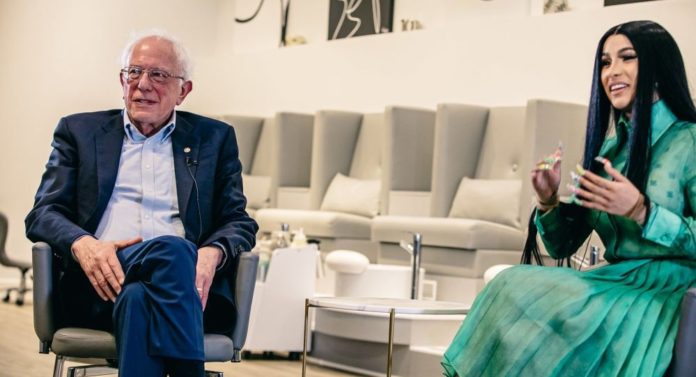 Cardi B has shared her political views with the world before on her Instagram. But now the rap star has taken action by meeting up with Democratic Candidate , Sen. Bernie Sanders. The duo plan to work together on a campaign video targeted towards this young generation.

Cardi B shared a photo of herself and Sen. Bernie Sanders discussing questions submitted by her fans. “Stay tuned to see how he will fight for economic, racial, and social justice for all,” she wrote in her Instagram post. “Together, let’s build a movement of young people to transform this country.”

Not me, US. Thank you Senator Bernie Sanders for sitting with me and sharing your plans on how you will change this country. A couple of weeks ago I asked my followers if you had the opportunity to have a question answered by a democratic candidate what would it be ? I got a lot of submission and selected the most popular questions to get answered. Stay tuned to see how he will fight for economic, racial, and social justice for all. Together, let’s build a movement of young people to transform this country.LETS LEARN OUR CANDIDATES!

Sen. Sanders told CNN that he and Cardi B, “We (are) working on a way to involve more young people in the political process,” Sanders told CNN. “The future of America depends on young people. They are voting in large numbers, but not large enough numbers.”

We can’t wait to see what this dynamic duo has planned for this campaign season.