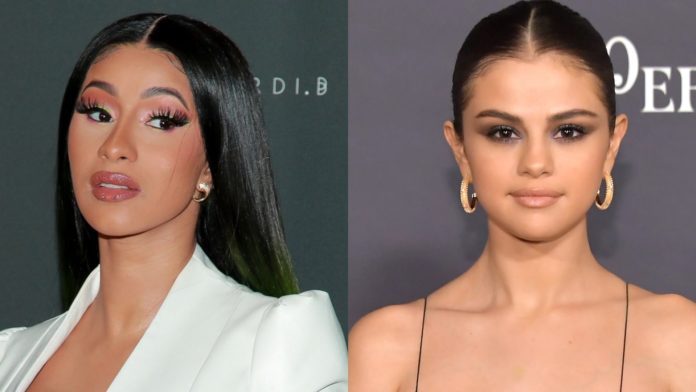 Actress Selena Gomez hints at retiring from music; Rapper Cardi B states she wants to see “one more Era” of Gomez before her musical exit.

The “Hands to Myself” singer, who recently released her first Spanish-Ep, hinted at her music retirement in Vogue’s April cover.

“It hard to keep doing music when people don’t necessarily take you seriously,” Gomez tells Vogue. “I’ve had moments where I’ve been like, ‘What’s the point? Why do I keep doing this? ‘Lose You to Love Me’ I felt was the best song I’ve ever released, and for some people, it still wasn’t enough.”

“I think there are a lot of people who enjoy my music, and for that, I’m so thankful, fore that I keep going,” she adds. “But I think the next time I do an album it’ll be different. I want to give it one last try before I maybe retire from music.”

Amidst the outcry from Gomez’s fanbase urging the singer to continue her music, “WAP” rapper Cardi B took to Twitter giving her advice for Gomez’s music career.

In a series of tweets, the rapper advises the former Disney darling to challenge her good-girl image.

I don’t think Selena should retire .She makes good music & her fans love her .I think she needs one more Era. A edgy one that no one ever seen her as .I would love to give her some ideas

“I don’t think Selena should retire,” Cardi writes. “She makes Good music & her fans love her. I think she needs one more ERA. A edgy one that no one ever seen her a. I would love to give her some ideas.”

“A bad bitch era is needed tho,” she continues. “A bitch I’m nice sweet girl but I’m a rich bad bitch too.”

In a later tweet, Cardi confirms her admiration for Selena.

“I like Selena tho,” she writes. “I defend her cause she is such a sweetheart in person. Us celebs get picked apart all the time but she is just to sweet to go thru that. If she wants to leave, leave cause you want to not cause out these f—ers.”

Although Gomez has yet to respond to Cardi B’s advice, according to Los Angeles Times, Gomez plans a South American tour once the pandemic is over.

Meanwhile, Cardi B’s jaw-dropping “WAP” performance at the 63rd Grammy Awards on Sunday night sent the internet in a frenzy.

The sex-positive-themed performance was regarded as one of the “best moments of the Night.“