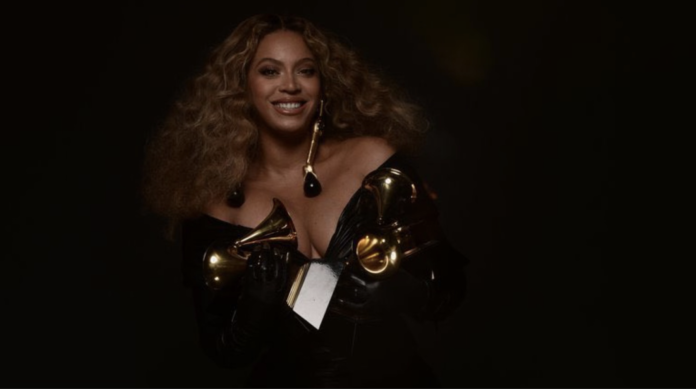 Beyoncé made history with her 28th win at the 63rd GRAMMY Awards on Sunday. She has surpassed Alison Krauss’ 27 wins, and is now tied with legendary Quincy Jones, and is four wins away from catching up with George Stolti, who holds the record with 31 GRAMMYs.

When accepting her 28th awards for the best R&B performance for “Black Parade,” Queen B opened her speech saying she was “So honored,” and “excited.”

“As an artist, I believe it’s my job and all of our jobs to reflect the times, and it’s been such a difficult time. So I wanted to uplift and encourage all of the Black queens and kings.”

“I can’t believe this happened, it’s such a magical night,” she explains before shouting out her daughter, Blue Ivy, who also took home her first Grammy at 9 for “Brown Skin Girl,” saying, “I know my daughter is watching, two daughters and my son are watching,” she said “Blue, congratulations you won a Grammy tonight. I’m so proud. I love you so much, my rock.”

She also took home an award for the viral TikTok song “Savage Remix” with Megan Thee Stallion. And raised the rapper during her acceptance speech saying, “I have so much respect for you. I’m honored that you asked me to be a part of this song.”

Beyonce was the most nominated artist at the GRAMMYs with a total of nine nominations and four wins.