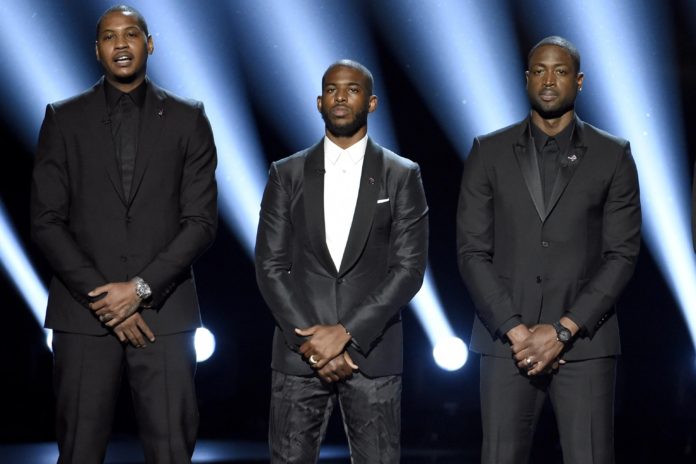 During an episode of What’s in Your Glass, NBA all-star Carmelo Anthony spoke with comedian Tiffany Haddish regarding growing and supporting the black community through his new Social Change fund, founded by current and former NBA Stars, Dwayne Wade and Chris Paul.

“We’re supporting organizations that are actually on the ground, that’s really putting in the work.” Anthony tells Haddish “We invite other people, not just athletes, to join this fund, so they can tackle the lanes that they want to tackle.”

The NBA All-Star Trio has a long history of social justice advocacy.

At the 2016 ESPY awards together, Wade, Anthony and Paul accompanied by Lebron James delivered a speech against police brutality.

Last week, the NBA All-Stars took to social media to promote their new joint effort to uplift the black community.

In a statement, Anthony says ” I stand for everything this Fund is and it’s beneficiaries support and will not stop pushing for progress until we see an end to the systematic racism that the Black Community has faced for too long.”

According to the press release, Anthony, Wade, and Paul will serve on the Fund’s Founders Council. In an effort to “help determine funding priorities, elect beneficiaries, and manage relationships with donors and partners.”

“We working over here!” Anthony replies to Haddish informing her to look forward as they continue to grow and pursue change.

For more information about the Social Change Fund and the ways, you can help or donate, click here.