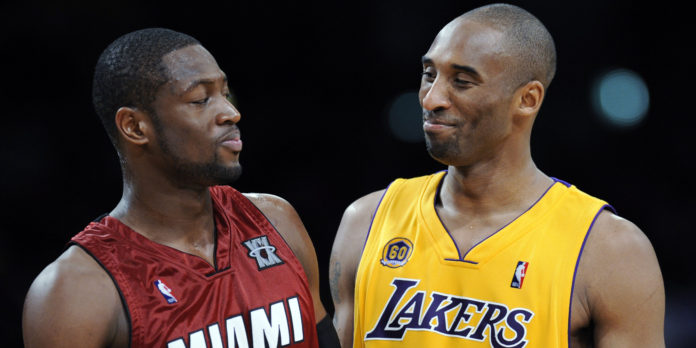 Earlier this year we sadly lost one of the best sportsman of all time in a tragic helicopter crash. Kobe Bryant was a young, talented and successful business man who dominated in any field he entered. The loss was a hard one for the sports community but his memory will not be forgotten. Retired Miami Heat star, Dwyane Wade, paid tribute to Kobe Bryant with his latest ‘Way of Wade’ sneaker colorway.

On Sunday, Wade gave fans a first look at the new colorway of his signature shoe, Way of Wade. According to TMZ Sports, Both of Bryant’s numbers, No. 8 and No. 24, are visible on the tongue of each shoe, which are decorated in Los Angeles Lakers colors. Right above the numbers are halos. The inner sole of the sneaker displays a common phrase said by Bryant: “Great things come from hard work and perseverance. No excuses.”

Wade spoke about the sneaker’s inspiration and the relation he had with Bryant. “I built one. Early on Kobe didn’t have a lot of relationships,” Wade explained. “I got a chance to build one with the respect of Kobe. I can call him anytime and vice versa. That’s one of the relationships that I’m proud of. To be able to have one with one of my fave players of all time was special.”

This tribute is a great way to honor the friendship that was built between the two. #MambaForever.