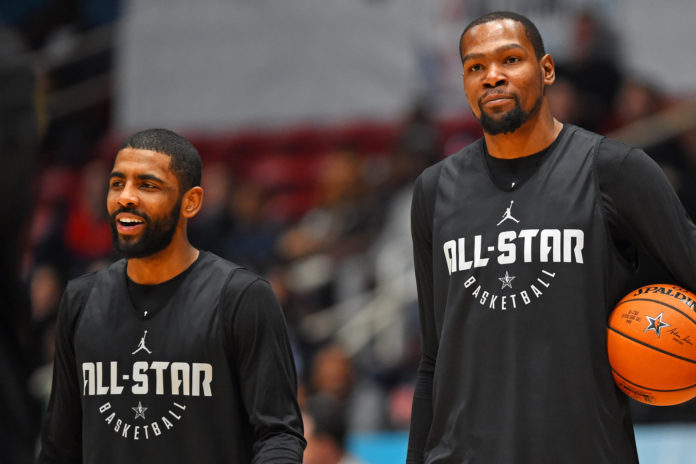 “The Etcs” podcast with Kevin Durant” sparked up a wholesome conversation between him and Brooklyn Nets brother, Kyrie Irving. On Durants 32nd birthday he dropped an hour-long discussion about their friendship and how it has developed over the years.

Most people think their friendship started in the NBA but they go way back. The two revealed that their friendship, which may have blossomed in Rio de Janiero during the 2016 Olympics, actually goes back to 2011-12 and the Nike Elite Youth Basketball League.

“Me and Kyrie have a mutual friend in Jeff Rogers who worked at Nike. He was our grassroots guy,” Durant said. “Over time once Ky got into the league Jeff just happened to throw us in the text one night.

Durant continued, “We were playing the Cavs…and me looking at it like we’re No. 1 in the West, we’re playing against a (crappy) Cavs team – this is before I’d seen the light on Kyrie Irving – and I get this text from Jeff and Ky, and Ky was straight up serious. I’m joking around thinking it’s just another game, and Ky was so locked-in, like “We’re going to see tomorrow.” It wasn’t what’s up little bro, big bro; it’s like alright, I’m going to see what’s up tomorrow.”

From there the two developed a metal respect for each other based on their skills while on the court. They worked on their craft and started talking daily, it became a brotherhood that eventually brought them to Brooklyn.

“Once we started to kick in and talk about what we’d like to do outside of the game and who our family started to meet, and it just became easy, you know? And obviously the common ground is how we hoop and how we love the game of basketball. But it just branched off from there,” Durant said.

“And we started to (talk) every day on FaceTime. What do you think about this shot? What’d you think about this move that I did in this game? How about you, when Brad (Stevens) takes you out, it was six minutes to go on the first quarter, how you approach the game coming back? We’d have these types of conversations all day, every day. And it just grew from there. It was organic. It wasn’t something that you can pinpoint and say this was the moment. It just happened.”

The duo joined the Nets last summer, to which Irving says “we unveiled one of the biggest surprise moves in NBA history.” Despite Durant’s Achilles and Irving’s shoulder injury, they agree their synergy will have them on the same page next year.

“Doing it with a family member (will be great), not just a friend, somebody you just kick it with and you’re like let’s go hoop today and you see them only at the arena. But the synergy is connected to who we are as people first,” said Irving,