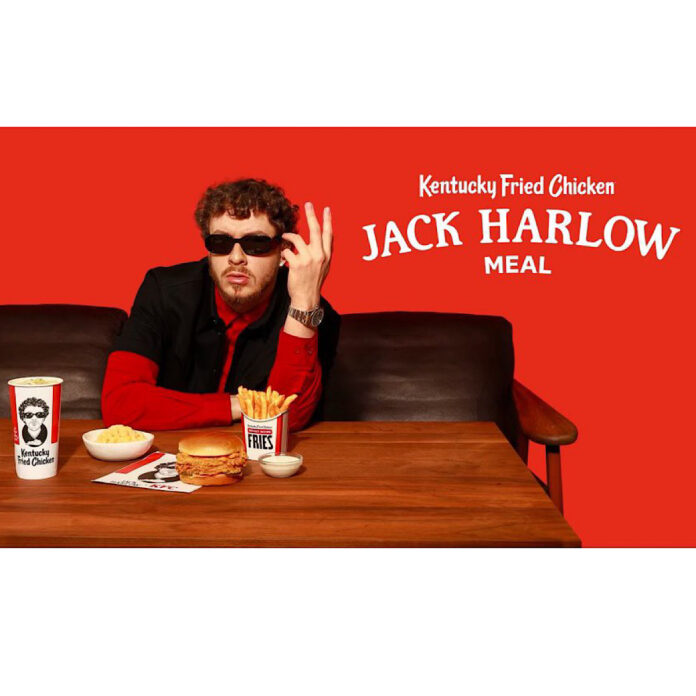 Rapper Jack Harlow is taking us to first class with his new Kentucky Fried Chicken meal. The Kentucky native announced the partnership with the finger lickin’ good fast food chain with a new combo meal for fans to indulge in. On June 6th customers can request Harlow’s meal combo which includes the KFC spicy chicken sandwich, mac and cheese, secret recipe fries, a side of ranch, and a lemonade. The special combo is all served with custom Jack Harlow-KFC packaging.

Harlow has joined the trend of collaboration between celebrities and fast food chains. The collab brings loads of success to the celebrity and customers to the drive thru line, as we saw with the McDonald’s Saweetie meal. “When KFC asked me to create my own meal, I knew it couldn’t be just any meal. My meal brings together my childhood favorites from growing up in Louisville, the KFC Mac and Cheese, with my new go-to Spicy Chicken Sandwich (with plenty of ranch), Secret Recipe Fries, and lemonade – it doesn’t get much better,” Harlow said in a press release.

The meal is accompanied with a limited-edition merch drop. Fans interested in the merch can find out how and when to cop that on the KFC app exclusively. Although this is the latest installment of the partnership, this has been a working business relationship for almost a year now. “Growing up I always dreamed of being the biggest artist to come from Kentucky. Now I’m teaming up with @KFC, the biggest brand to come out of Kentucky,” Harlow wrote on Instagram when the news first dropped. “For the next year, we’re gonna do some big things together.”

One of the first campaigns they carried out was giving back in the wake of the tragic Kentucky Tornado at the end of last year.

Harlow and Yum! Brand (KFC’s parent company) donated $250,000 to the American Red Cross to aid relief efforts for communities affected by the deadly Dec. 11 tornado. The Kentucky native is excited about finding different ways to give back to the place that raised him.

To promote his new project, the artist himself appeared at a Georgia restaurant on Saturday. He was seen taking photos with some fans at the KFC at 2637 Cobb Parkway in Smyrna.