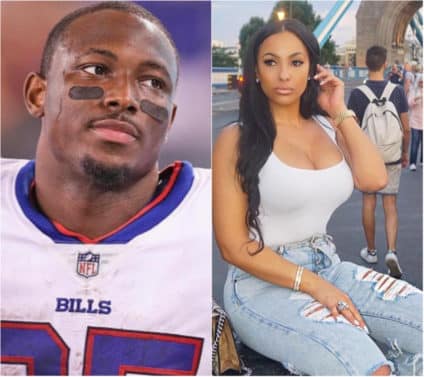 WAS IT A SETUP? MORE DETAILS INSIDE

LeSean McCoy’s ex girlfriend Delicia Cordon was beaten and robbed in the Atlanta home they once shared. The home invasion is being investigated by Georgia police as well as the NFL. Although there are no identified suspects Cordon’s friends and family seem to be blaming McCoy for the incident, claiming Cordon was set up intentionally along with bringing up his alleged abusive behavior throughout the duration of their relationship. McCoy, who has been training in Miami this summer, denied these accusations stating he has not had direct contact with her in months.

Delicia Cordon’s attorneys  released a statement to multiple media outlets describing what happen exactly during the home invasion. “Cordon was sleeping in the home when the robbers entered the house, demanding “specific items of jewelry” that she had received from McCoy before being beaten. There were no signs of forced entry, the attorneys said.” The statement also details previous conversations between Cordon and  McCoy where he made comments about wanting the jewelry back from Cordon and said she could be robbed because the jewelry was expensive.

Fulton County court records show McCoy had been attempting since last July to evict Cordon from the home. A hearing was scheduled for Tuesday, the day of the robbery, but it was rescheduled to Aug. 14 because of an emergency in Cordon’s attorney’s family. Earlier this summer while Cordon was out of town, McCoy directed “his family, friends and laborers” to remove Cordon’s furniture from the home in an attempt to evict Cordon along with changing the house’s alarm system and removed security cameras previously accessed by Cordon.

There seems to be a missing piece to the unsolved mystery and even though Cordon and family have there own theory McCoy has still not been identified by investigators as a suspect. JaGurl TV want to know what you think?