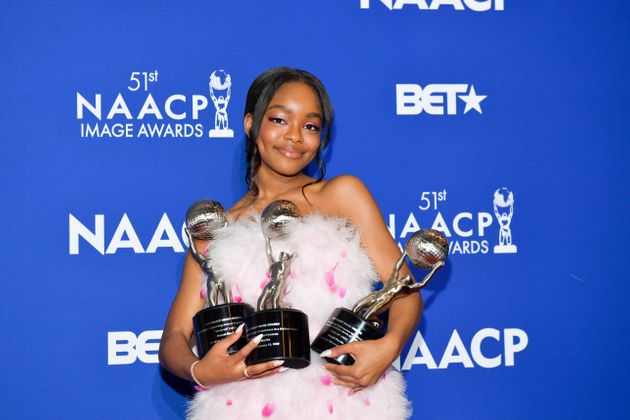 Marsai Martin is a young talent embodies our next generation of black excellence. As the youngest to have her own production company at only 15 years old, the “black-ish” actress took home four NAACP Image Awards Saturday night. Between acting, directing and creating new content for the world to see, this girl is constantly booked and busy. You have to wonder how she has time to balance her work and social life at such a imperative age.

“I just make sure nothing gets too crazy for me on the work side. I always make sure I take care of myself or make sure I don’t overwork myself. I know when I overwork myself for sure, but even my friends are here tonight so I always try to make sure to keep a happy medium.”  Martin tells JaGurl TV.

Martin shared how interesting it is to be an inspiration to those who are older than her. Especially to people that she has looked up to for years as a new comer in the industry. She expressed her shock by saying, “Yeah, so many times this is crazy. It’s hard to wrap my head around it because imagine watching someone for so long and being in the position that you’re in and now they are fans of you.”

According to The Hollywood Reporter, Marti is not slowing down anytime soon as she will serve as a producer on an upcoming feature comedy titled Queen. The owner of Genius Productions will work with Camila Blackett, who has already signed on to be a part of the script for Queen.