Home Hot Tea NBA Players Kneel During National Anthem As A Statement Against Racism in... 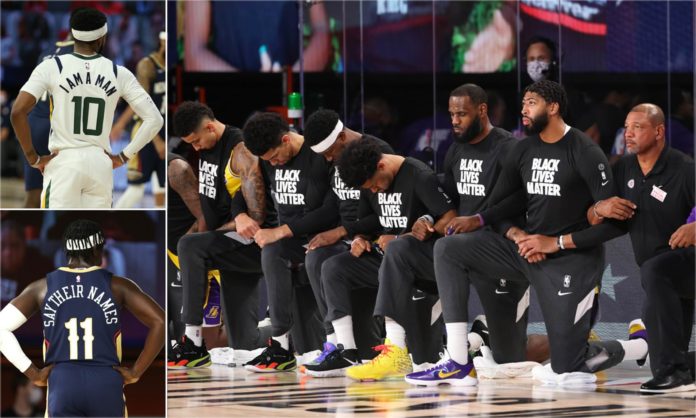 In the first set of games of the season’s restart, NBA players and coaches from four NBA teams, Utah Jazz, New Orleans Pelicans, Los Angeles Lakers, and Clippers, knelt during the national anthem in support of the nationwide protest against police brutality.

Players, coaches, and game officials locked arms, some put their hands over their hearts and others raised their fists as the knelt behind the Black Lives Matter printed on the courts at the ESPN Wide World Sports Complex in the Walt Disney World Resort.

Under their Black Lives Matter t-shirts, players on each team wore messages on their jerseys continuing to support the nationwide movement of equality and social justice.

After the scoring the game-winning shot, the Lakers Lebron James told reporters he hopes the kneeling protest made Kaepernick proud.

“I hope we continue to make Kaep proud,” James told reporters. “Every single day I hope I make him proud on how I live my life, not only on the basketball floor, but off the floor. I want to always speak out about things that I feel like are unjust. I always want to be educated on things and always go about it that way.”

The former 49ers quarterback Collin Kaepernick, started the silent protest of kneeling during the national anthem, during the NFL preseason in 2016.

Public backlash from his protest resulted in Kaepernick leaving the 49ers in March 2017. Till this day, he has not played in the NFL and remains a free agent.

“Kap was someone who stood up when times wasn’t comfortable when people didn’t understand, people refused to listen to what he was saying,” James further explained. “If you go back and go look at any of his postgame interviews when he was talking about why he was kneeling, it had absolutely nothing to do about the flag. It had absolutely nothing to do with the soldiers.”

The NBA star expressed admiration for Kaepernik and continued.

“He explained that and the ears were closed, people never listened, they refused to listen, but I did, and a lot of people in the Black community did listen, and we just thank him for him sacrificing everything that he did to put us in a position today, even years later, to be able to have that moment like we had tonight.”

In a statement for The New York times, NBA commissioner Adam Silver expressed support for the player’s decision to kneel, “I respect our teams’ unified act of peaceful protest for social justice and under these unique circumstances will not enforce our long-standing rule requiring standing during the playing of our national anthem.”

Protests broke out across the Nation, in response to the viral video depicting the killing of George Floyd, a Black man, by Minneapolis police officers on May 25.