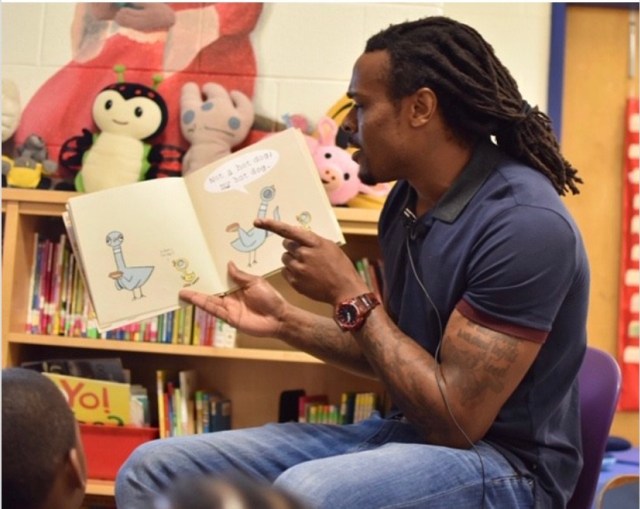 Brandon Carey Carr is an NFL football cornerback for the Baltimore Ravens. The 33-year-old started his NFL career when he was drafted by the Kansas City Chiefs in the fifth round of the 2008 draft. Before he was a baller, Carr submerged himself in the world of books during his upbringing in Flint, Michigan. Being a scholar gave him an outlet to let his mind explore and wonder in the world of the characters he was reading about. Books gave him a world outside of his surroundings and as an adult he want to pass that same joy to children.

“Early on books were just an outlet for me,” Carr told ESSENCE. “Back in my early days I was a Bernstein Bears guy, I loved me some Clifford.” He continued, “I was able to indulge and to kind of dive into the fantasy world, with fiction books and just different characters and have an outlet from the daily rigors and stresses.”

Reading inspired Carr to imagine and dream even when time were hard in his young life. This is why he took it upon himself to inspire children with an innovative way to supply children with the tools that they need. Carr created a literacy subscription box program called Lit Buddies. These subscriptions are sent out to classrooms in Baltimore and Dallas as a part of his Carr Cares Foundation. Every month a new themed box is each box is put together including two books and goodies like wristlets, water bottles and tote bags.

The power of reading is a tool each child should possess. By doing this Carr is making education a priority, encouraging strong language skills, and equipping low end school with some much needed supplies to teach their youth. We love getting back to the basics!