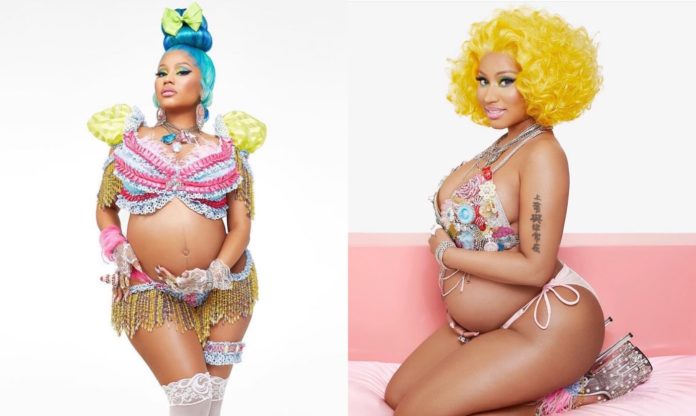 Monday, July 20th, the 37-year-old-rapper announced via Instagram, in a series of maternity photos, that she is expecting her first child with husband, Kenneth Petty.

In the first photo, the mom-to-be is dressed in a blinged-out floral bikini top paired with sky-high platform heels while cradling her growing baby bump.

In the third image, Minaj sports the previous blinged-out bra and neon yellow curls, while relaxing on a pink couch. She captioned the photo, “Love. Marriage. Baby carriage. Overflowing with excitement & gratitude. Thank you all for the well wishes.”

The happy news comes just nine months after the “Yikes” rapper surprised fans last October by announcing, she and boyfriend of a year Petty tied the knot.

According to ETonline, during an episode of Lil Wayne‘s Apple Music series, Young Money Radio with Lil Wayne, Minaj referred to her marriage as “refreshing and calming.”

“I can’t complain. I really cannot freaking complain,” she said. “I didn’t think it would be as refreshing and calming as it is. Even if you’re not married, when you have someone that feels like your soulmate or someone who understands you, it just makes you feel like you’re on top of the world.”

Minaj’s and Petty’s will be at the end of a blissful first year of marriage by welcoming their first child.