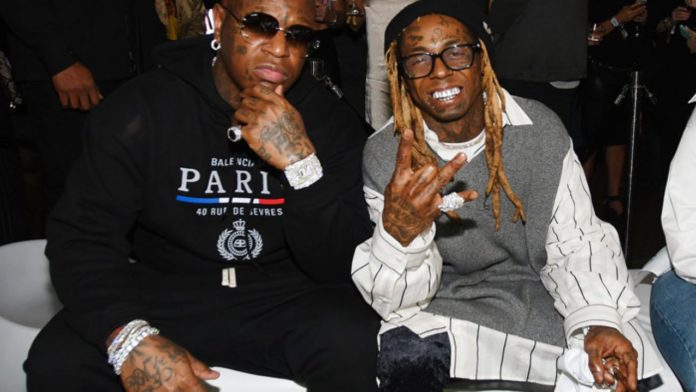 Despite their previous legal issue, the iconic duo remained friends. Wayne introduced Birdman as his “pops”. During the last few minutes of their conversation, Birdman revealed that he is done with rapping.

“You know I’m done rapping,” he said. “Rapping ain’t for me no more, I’m done with that shit. I like to make rappers, that’s what I do.”

But before the Cash Money OG puts down his mic he would like to do one last project with Lil Wayne. “I would like to do a Like Father, Like Son Two,” Birdman announced. Without hesitation Lil Wayne voiced his approval. “Man, come on. You ain’t got to ask. Come on, man, that was not a question,” said Wayne. “Man, come on, man. You know I’m going to send you six joints for you to put the verses to them. You know how I do, man.”

Like Father, Like Son album is Lil Wayne and Birdman’s joint project that released back in 2006. According to XXL, the album peaked at No. 3 on the Billboard charts featuring singles like “Stuntin’ Like My Daddy” and “Leather So Soft.”

Birdman referred to his last album with Wayne as his farewell to rap. “Real rap. So, I just want it to be my little farewell thing. I want to go out how I came in.” Birdman tells Wayne. Lil Wayne and Birdman’s relationship goes all the way back to Wayne’s childhood.

According to XXL Magazine, Birdman first met Lil Wayne when he was 8 years old. Quickly becoming a mentor and father figure to the young Wayne whose biological father was absent. Three years after their meeting, Wayne signed to Birdman’s Label, Cash Money Records, where he resided for the next two decades.

In 2003, Wayne launched his own label, Young Money Entertainment, which was a joint business venture with Birdman’s Cash Money Records. The Young Money, Cash Money(YMCM) empire launched the careers of some of the most notable rappers in modern rap.

This label birthed music icons like Nicki Minaj and Drake. RevoltTV referred to the YMCM reign in the early 2000s as “unstoppable.”

Wayne and Birdman’s relationship hit rough waters in the mid-2010s. According to XXL, in 2015 Wayne sued Cash Money for $51 million, claiming he was not receiving proper pay and royalties for him music

Despite their very public feud, Birdman and Lil Wayne settled out of court. Wayne was released from his contract and rewarded sole ownership of Young Money Entertainment.