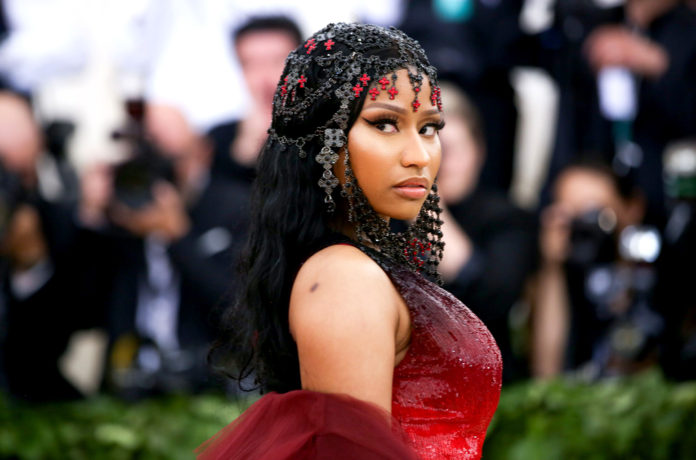 Earlier on Sunday, Nicki Minaj took to Twitter to explain to her fans and followers as to why Queen has not been performing as well in streaming as expected. Nicki’s album officially took Billboard’s number two spot after the first week of its debut, but with Travis Scott’s album “Astroworld” taking the number one position. 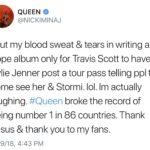 Minaj goes on to say that she put her “blood, sweat, and tears in writing a dope album only for Travis Scott to have Kylie Jenner post a tour pass telling people to come to see her and Stormi.” Ouch. Many of her followers commented on how the continuoustweets came off from a seemingly jealous angle over ranks and numbers that even ended with Minaj calling out Spotify about the issue at hand.

Spotify allegedly has affected Nicki’s first-week album sales by not fulfilling promotional promises of her album as they did her label mate, Drake. She goes on to say that because of her streaming Queen on her Apple radio show ten minutes prior to the release on Spotify was grounds for the company affecting her streaming numbers. Minaj also adds in how Spotify managed to promote Drake’s album “Scorpion” during the first couple of weeks despite him also having his very own Apple radio show. 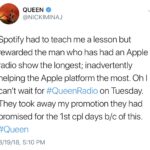 Later on during her Twitter rant, Nicki uses her situation to reflect on how women in the everyday work setting often get the same “blackball” treatment, but they often cannot do anything about it because of men presiding over these issues.We also know that Nicki Minaj has been an advocate about the mistreatment of women in society… especially females in the rap game.

Many on Twitter say that Nicki is overdoing it with this rant by bringing Kylie and Stormi into the mix, but some fans are convinced Minaj is becoming too much about the numbers and should just let it go.

Minaj is set to go further in depth to the situation on her Queen Radio this Tuesday.