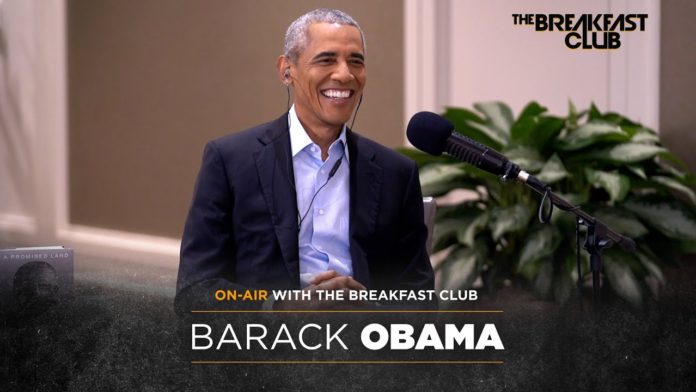 In an interview with the Breakfast Club, Former President Barack Obama discusses highlights from his new memoir, A Promised Land.

During the interview, Obama responds to one of the biggest critiques of his presidency; what did he do to help black Americans.

“I understand it because when I got elected there was so much excitement and hope,” Obama says. “And I also think that we genuinely view the presidency as almost like a monarchy. In the sense of ‘once the president’s there, he can just do whatever needs to get done and if he’s not doing it, it must be because he didn’t want to do it.”

DJ Envy responds, using President Trump as an example of a President doing as they wish.

“Because he breaks the law or disregards the constitution,” Obama says to Envy.

Obama uses statistics to explain the wins the Black community achieved while he was in office.

“Millions of Black Folks were better off at the time I left office than when I came in,” he adds.

“But what I’m saying Charlamagne is, Black poverty dropped faster than everybody else,” the former president further explains. “Black incomes went up more than a lot of other folks.”

“The truth of the matter is,” the former president adds. “There is no way in eight years to make up for 200 years.”

Watch the full interview below.