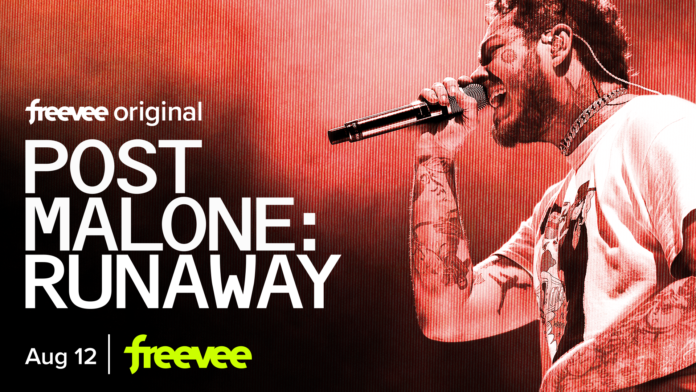 Months before COVID-19, Grammy-nominated artist Post Malone started his Runaway Tour that set the tone for his music career. Freevee, an Amazon streaming service, announced the release of the Post Malone: Runaway Documentary.

Filmed by award-winning studio, Pulse Films, the Runaway documentary will showcase exclusive footage allowing viewers to dive into what made that tour a fan-favorite. Director Hector Dockrill describes his experience,  “Being on tour with Post is like every emotion hitting you at once, it’s intense and it’s wild, and our vision was to pull fans into the experience just enough to get a glimpse of this, while leaving the rest to the imagination.”

“Post Malone is a once-in-a-generation artist. A musician who has consistently defied categorization and set his own creative agenda. At Pulse Films, we have always been drawn to creatives that break the mold, and so working with Post, his team, and label to document this legendary tour has been a privilege,” said Sam Bridger, head of music documentaries, Pulse Films.

The documentary will also feature interviews, backstage access, and live performances. Freevee will release the one-hour documentary August 12 where viewers will experience everything that went into Post Malone’s legendary Runaway tour.