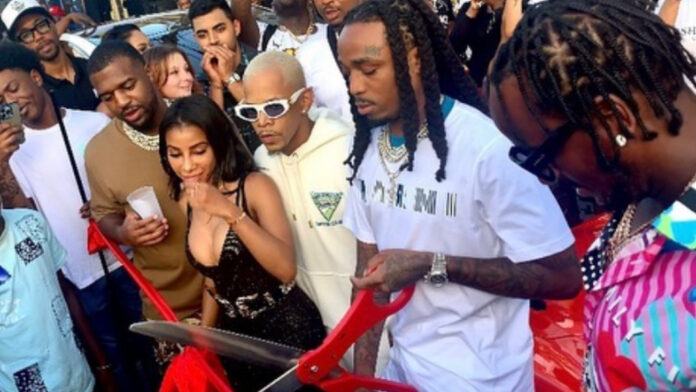 Quavo, 1/3 member of the Migos, has always found ways to give back in Atlanta. Just early this year in May the ‘Bad and Bougie’ mega star donated $150,000 to single mothers in Georgia as well as launching a COVID-19 fundraiser for Atlanta health care workers back in 2020.

On Monday, July 11th Quavo hosted the grand opening of his new smoke shop in partnership with Smoke World Co. The unveiling was held in front of the Edgewood location. “This is one of my first businesses, to many many businesses. We trying to create more businesses around Atlanta, and making sure we represent for the culture, doing this s**t the right way” Quavo announced before cutting the red ribbon to let fans and supporters into the shop for a first look.

The unveiling was open to the public and special guest including Trina, and Quavos mother Edna Marshall were in attendance. “This is my first hands on store that I invested in with my guys and my friends. I just wanna always put my boys on and do it for the culture, and create jobs for the community; and we smoke a lot, so why not make a smoke shop” Quavo tells JaGurl TV in an exclusive interview at the grand opening.

This is his first partnership with Smoke World Co. and they opened their doors to him with arms wide open. “Quavo’s a very dynamic individual,” says Smoke World Co. co-owner Kellen, “he lives and breathes the smoke shop; he is in this world as a rapper and entrepreneur this is his their life and it only makes scenes to have him here”.

Be sure to check out Quavos Smoke Shop located in the heart of Downtown Atlanta on Edgewood Ave.