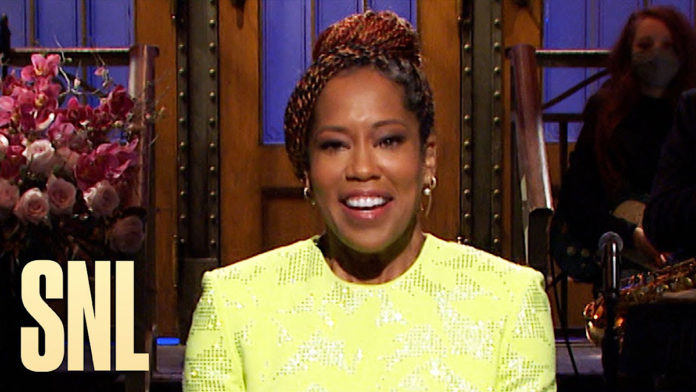 Regina King is adding on to her long resume of skills. The 50-year old Oscar winning actress has just made her first appearance on NBC late-night sketch series, Saturday Night Live.

On February 13th, king gave us a grand entrance into Valentine’s Day. With support from singer-songwriter Nathaniel Rateliff and Dan Levy, the star did a killer job being her funny self and hosting the show. King shared a photo on Instagram Story and wrote, “Awww. You’re the best @instadanjlevy You crushed it! #snl.” Levy then shared King’s post on his own Instagram Story, writing, “Can’t wait to watch you know it out the park this weekend. @iamreginking!”

King kicked off her episode with a lengthy monologue saying, “I can’t believe I am actually here hosting Saturday Night Live,” she began. “I remember watching Eddie Murphy on this show when I was a little kid thinking, ‘Wow, someday I’m gonna be on that stage.’ Then he left and I was like, ‘Hm, I’m good.’ I’m kidding, it really is such an honor.” She continued, “I’ve had a pretty wild career. If you’re Black, you probably know me from being in some of your favorite movies. And if you’re white, you probably know me from Watchmen or this monologue right now. I’m not complaining, I kind of like it that way. Whenever Black fame gets too crazy for me I go to the nearest white town and I’m a regular old suspicious shopper again.”

Although nervous, King support the SNL group in all aspects and used her acting talents to star in multiple sketches. Particularly King shined in the “Gorilla Glue” sketch, during which her and Kenan Thompson played two lawyers in a commercial dedicated to suing the makers of Gorilla Glue.

Regina King is truly a legend! Watch the full video below: