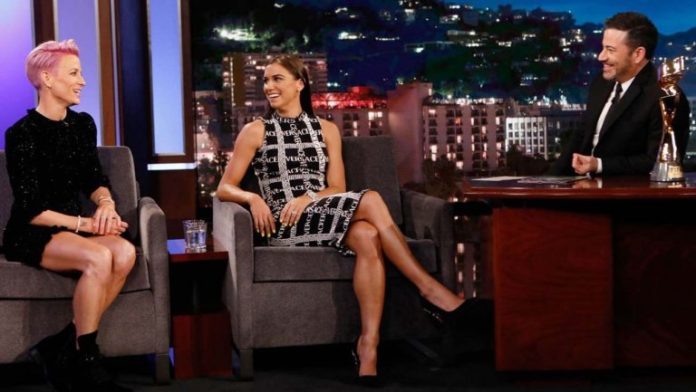 The two champs came out holding the victory they brought back to America, the World Cup! Jimmy started the interview off by commenting that he was surprised that the World Cup .. isn’t a cup.

“I know, we were looking forward to drinking out of it but that’s how it comes” Alex stated

The interview then jumped into the conversation that has been heavily discussed lately, equal pay.

“Is it a situation where you would consider boycotting the next World Cup if this is not remedied properly?” Jimmy asked

“Yea I mean we are working towards that, but I think also our fans and everyone are speaking for us on our behalf” Alex stated

Jimmy also brought up that Trump was planning on inviting them to the White House, getting a small head nod “no” from Megan. The talk show host ended the show by trying to prepare Megan & Alex if they ever go to visit the White House by revealing 5,000 chicken nuggets from McDonald’s.