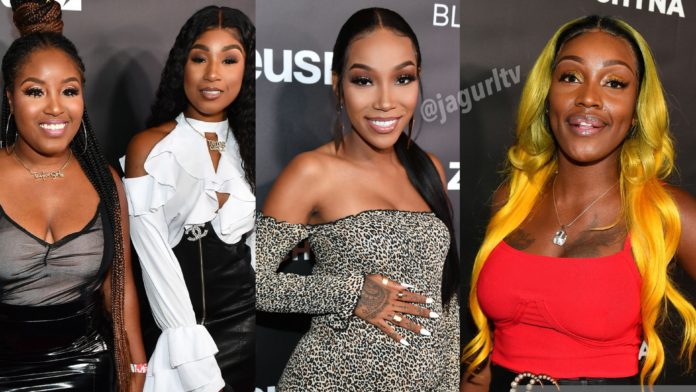 Sunday night Blac Chyna had her private premiere for The Real Blac Chyna and JaGurl TV was in attendance. It was a star-studded red carpet which included some of Atlanta’s biggest female Hip Hop artist including Grand Hustles very own Tokyo Jetz and Taylor Girlz.

The female artist is making a huge emerge in the hip hop scene. Which is why Jermaine Dupri’s recent statement he made about female rappers raises a bunch of eyebrows. Hip hop mogul Jermaine Dupri spoke with People Now on Thursday, July 11, and stated “.. for me, it’s like strippers rapping and as far as rap goes, I’m not getting who’s the best”

Many female artists like the platinum-selling rapper, Cardi B, spoke out against Jermaine Dupri stating “ First of all I rap about my p*** because she’s my best friend, and second of all it’s because it seems like that’s what people want to hear … when I did ‘Be Careful’ people were talking mad s** at the beginning like ‘What the f** is this’ ….”

JaGurlTv spoke with Tokyo Jetz, Taylor Girlz, and Fun Gin Jah to see what they had to say about JD’s comment.

Tokyo Jetz stated, “ I just think for one it’s like really sexist for a man to feel like he has the opportunity to speak on what female rap should be on right now, and then secondly that’s a whole generation of rap and things are changing everything changes with time so you can’t expect everybody to still rap like Missy or everybody to still rap like Da Brat like we’re our own people, and male rappers have been saying what they wanted to say forever so don’t come in because we’re taking over to say what you think we need to do, let us ride baby.”

Taylor Girlz stated “My thoughts are we don’t need a male validation at the end of the day women is taking over and they mad .. they big maaad” they also followed up by saying “ We’re taking over the charts right now and it just feels good to see other women actually on the charts like it is so lit to see women because it been so long since women been on the charts so its amazing”

Fun Girl Jah stated “What’s understood does not have to be explained” She also explained what separates her from the other female rappers “My music is made for the women, and the females, and the males also so my music is versatile”

The event was an amazing turnout, and JaGurlTV hopes Blac Chyna new show is a success. How do you feel about Jermaine Dupri’s comment on today’s female rappers? Let us know in the comments below!