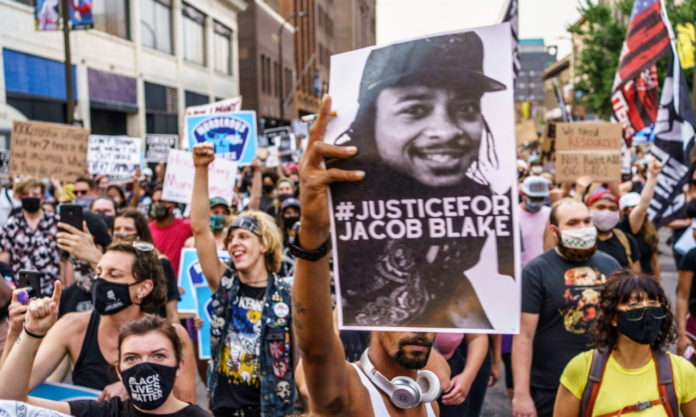 On August 23, another tragic shooting including a Black citizen and a police officer took place in Kenosha, Wisconsin.

The shooting of Jacob Blake, 29, was captured on cellphone video from across the street. Blake walked from the sidewalk to his SUV as shouting officers follow him with their guns pointed at him. Once in his SUV, Blake then got his shirt grabbed and officers began to open fire with his children in the car.

This has sparked local and national outrage due to the community experiencing another incident of police brutality. After the killings of Breonna Taylor and George Floyd earlier this year, Black communities have been impacted in a negative way by the years of racial injustice.

This Friday, August 28, on the 57th anniversary of the March on Washington for Jobs and Freedom, The National Action Network (NAN) and supporting activists will descend on the nation’s capital to address this critical issue with the Commitment March: Get Your Knee Off Our Necks. BET News will air coverage of the event in a LIVE two-hour special titled “A March for Action.”

Marc Lamont Hill hosts an in-depth conversation on this call to action and its urgency as our nation prepares for the biggest presidential election in a generation.

According to a BET press release, “‘A March for Action” will include in-studio discussion with host Marc Lamont Hill and guest contributor Professor Brittney Cooper (Rutgers University Scholar and Activist); and live reports from CBS News correspondents on site in Washington, D.C. With the Lincoln Memorial as a backdrop, the location of Dr. Martin Luther King Jr’s “I Have a Dream” speech, the call to action day will also feature a number of speakers and musical performances including Reverend Al Sharpton, Martin Luther King III, Attorney Benjamin Crump (legal counsel to the aforementioned shooting victim, Jacob Blake), the families of George Floyd, Breonna Taylor and Eric Garner, and DJ D-Nice. Gospel legend BeBe Winans will perform his new single “Black Lives Matter.’”