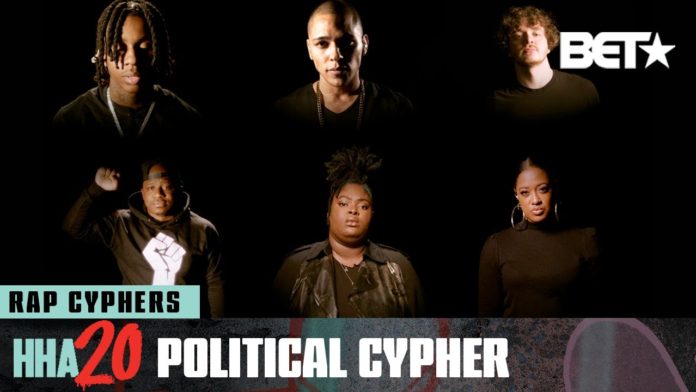 This politically charged cypher referenced America’s previous history of oppression against the Black community, current political and social justice issues, as well as the Trump administration and the ways they mishandled the coronavirus pandemic.

Polo G starts off the cypher, his verse setting the tone and energy for the evening.

“They really are the threat but that’s how they trying to portray me / When you spit the truth, they try to view as hate speech / Chi-town outspoken, hope they don’t try to ‘Ye me,” Polo G rapped. “They quick to say you crazy when you wake up and question them / Like tell us if this virus is fake or what. Segregation, generation, we’ve had to take enough / Can’t wait for them to change / Gotta show that we got faith in us.”

Followed by breakout star Chika, who in her verse calls on the spirits of fallen black social justice leaders willing them to aid the black community in its continued strife for equality.

“Now, we summon all the spirits of the Baldwins, the Malcoms and the Kings / Freedom ringing when we call them / People in the street, they tryin’ to vindicate the fallen / Tryin’ to find our way back / Reparations paid back / My money go to grieving’ mothers / I don’t need a Maybach,”  she rapped. “My drive is dedicated to my people under attack / Been rapping about the same oppression back then / In hopes that every melanated person get the lay back. And we gon’ get it come hell or high water / Expecting peace a delusional tall order / ‘Cause we ain’t free until it apply to every man / We gon’ kneel until we finally get to stand.”

Flawless Real Talk begins his verse speaking on the division of America’s political parties and the rise of white supremacy.

“Added fuel to the fire, they ignited history is now / Is we gon’ be the ones to write it? / I look at both parties, I don’t know if we invited / Ironic how this country’s first name is United / I don’t think it ever was / Cities being overran / ‘Cause we’re sick of asking for change like a homeless man,” he rapped. “Knowing that my skin could be the death of me/I could be the next to be/ Killed by the people that were sworn to be protecting me/ It’s either chemicals nor the food that they’ve been selling me/ You worried about supreme, I’m worried about supremacy.”

Each lyricist used their words to depict to viewers the current state of America and willing them to help create change through voters’ participation.

Rasopdy closed the cypher with an endorsement for Joe Biden and Kamala Harris.

Watch the cypher below.