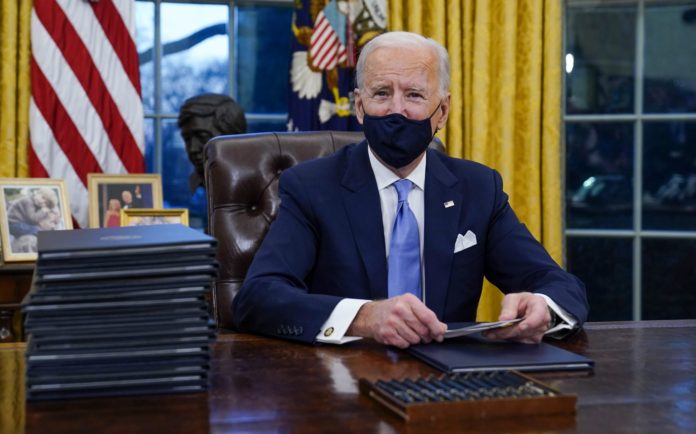 Our new President Joe Biden may still be settling into his office, but he is wasting no time executing change.

“We have never fully lived up to the founding principles of this nation, to state the obvious, that all people are created equal and have a right to be treated equally throughout their lives,” said Biden, who according to Essence, spoke in the State Dining Room.

The four executive orders Biden has signed are as followed:

Advance Fair Housing: A Presidential Memorandum “Redressing Our Nation’s and the Federal Government’s History of Discriminatory Housing Practices and Policies.” this will recognize the central role the federal government has played implementing housing policies across the United States, from redlining to mortgage discrimination to destructive federal highway construction, that have had racially discriminatory impacts.

This will also call for HUD officials to take the necessary steps based on that analysis to fully implement the Fair Housing Act’s requirements.

Reform America’s Incarceration System to End the Use of Private Prisons: Unfortunately more than half the individuals that are currently incarcerated in the U.S., are Black and/or people of color.Although, private prisons profiteer off of federal prisoners in what critics allege are less safe conditions for both prisoners and correctional officers alike. The order directs the attorney general not to renew Department of Justice contracts with privately operated criminal detention facilities.

Reaffirm the Federal Government’s Commitment to Tribal Sovereignty and Consultation: Adding on to aiming to tackle inequality, it would only make sense to strengthen the Nation-to-Nation relationship between the federal government and American Indian and Alaska Native Tribes, empowering self-determination, and advancing racial justice for Native communities.

The Executive Order restates the commitment of all federal agencies to engage in regular, robust, and meaningful consultation with tribal governments.

Combat Xenophobia Against Asian American and Pacific Islanders: People of color have always faced discrimination as a whole, according to Essence, In the past year, rates of harassment and violence against Asian Americans and Pacific Islanders (AAPIs) have risen dramatically. Various AAPI leaders have said former President Donald Trump’s derogatory rhetoric about the coronavirus (calling it the “kung flu” and “Chinese virus”) contributed to the hostile climate.”

The Memorandum directs the Department of Health and Human Services, in coordination with the COVID-19 Health Equity Task Force, the practices issued out will create a space for individuals to better comprehend other cultures. The practices will also focus on advancing in cultural competency, language access, and sensitivity towards AAPIs in the federal government’s COVID-19 response as well as directing the Department of Justice to partner with AAPI communities to prevent hate crimes and harassment in our communities.