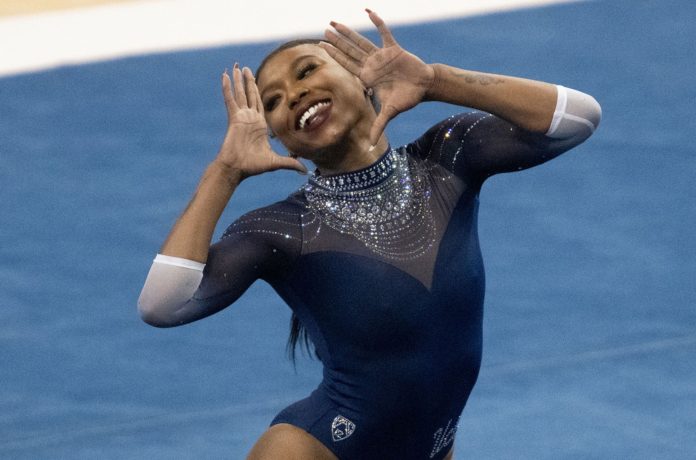 Dennis begins her routine by taking a knee and raising her fist. From there she leaps into an array of flips and moves as Kendrick Lamar‘s DNA blares. She pays homage to The Divine Nine and her father by featuring selective steps in her routine. She also incorporates various hip hop dance styles and moves into her routine. All while dancing to a mash-up of songs from Missy Elliot, Tupac, Megan Thee Stallion, and Beyonce.

The flawless performance scored a 9.95 by the judges.

But for Dennis, her routine was more than a score it was a form of self experession.

“[It’s] really a reflection of everything I am as a woman today,” Dennis tells Lester Holt on NBC Nightly News. In a press conference, she refers to her routine as a “dance party.”

The gymnast used her talents “to shine light on Black culture and bring it into the gymnastics world.”

Celebs joined in on the viral frenzy around Dennis’ “#BlackExcellence” Floor routine.

This is the first time Dennis’ energetic dance routine has gone viral. Last year, the UCLA student was featured on Ellen for her viral Homecoming inspired dance routine. The routine paid homage to Queen Bey by featuring some of her greatest hits such as “Crazy in Love” and “Ego.”