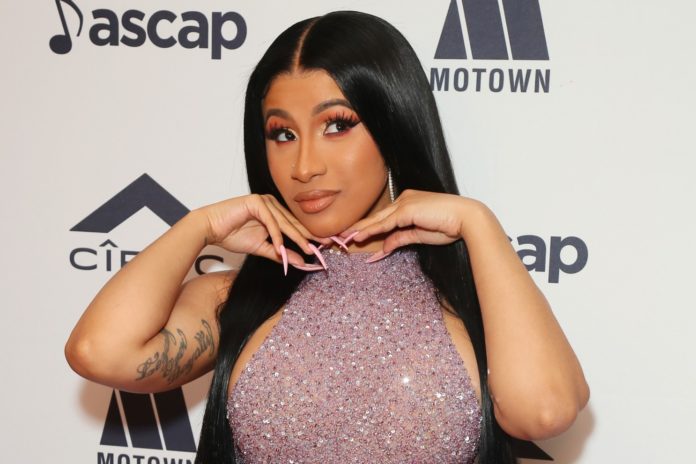 Cardi B sat down with Stationhead radio; the rapper explains how she found out she was pregnant and describes the steps she takes to maintain her happiness.

Cardi B sent the internet in a frenzy after announcing she is pregnant with her second child with husband Offest during their dual performance at the 2021 BET Awards. The Grammy winner wore an ensemble showing off her growing bundle of joy.

In 2018, Cardi announced her first pregnancy similarly. The “WAP” rapper announced that she was expecting a televised performance on “Saturday Night Live.”

Cardi tells Stationhead that she found out she was pregnant only a couple of weeks before her controversial Grammy performance.

While rehearsing the jaw-dropping WAP performance, Cardi noticed she wasn’t feeling up to par. The rapper noticed that she was beginning to experience car sickness, headaches, and nausea. These symptoms made her believe she was pregnant; she informed Offset of what she suspected. And she was right!

For this pregnancy, Cardi admits there were many things she did differently compared to her first. The biggest difference, choosing not to be as active on social media. She mentions how the negative commentary from people affected her mindset.

“People put me through a lot of s*** during Kulture’s pregnancy, a lot of lies were made about me… a lot of narratives,” she tells Stationhead. “I was in Atlanta while Offset was touring, and I didn’t have any family… This pregnancy, I didn’t want to remember any bad things, so I just took a break, got close to my family, had fun, and enjoyed myself and…I didn’t want to tell the world that I was pregnant.”

The rapper explains that she has experienced more happiness during her second pregnancy than when she was pregnant with Kulture.

“There is something so dear about this pregnancy, she says. “I feel like I’m starting a new chapter and I’m happy about that.”

Listen to the full interview here.