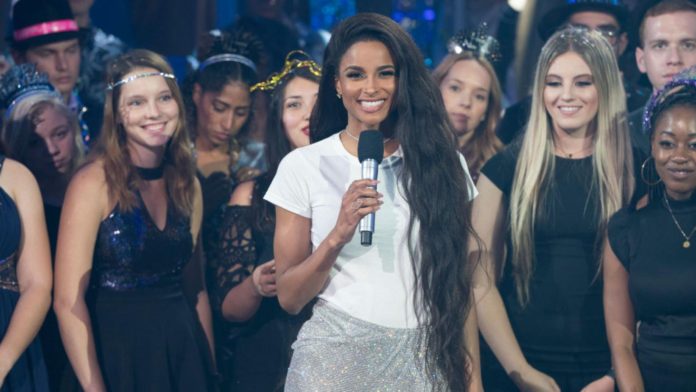 Ciara should just go ahead and add “Professional Show Host” to her resume as she just booked another hosting gig! Ciara has been named to host the West Coast party for the third year for Dick Clark’s New Year’s Rockin’ Eve with Ryan Seacrest 2020. According to Deadline.com The singer will be joined by Paula Abdul, Kelsea Ballerini, Blanco Brown, Dan + Shay, Green Day, Dua Lipa, Ava Max, Megan Thee Stallion, Anthony Ramos, Salt-N-Pepa and SHAED as performers at the event.

Ciara will also be performing that night as well. “Hosting ‘New Year’s Rockin’ Eve with Ryan Seacrest’ has become something I look forward to every year, and now my friend Lucy Hale and Billy Porter have joined the family, so the party just leveled up!” said Ciara. “I am going to be performing my new song ‘Melanin,’ so I hope all my melanin kings and queens’ tune-in to rock out with me and the amazing line-up of performers this year.”

This will be the 48th Anniversary of the Dick Clark New Year’s special, and will include 5 1⁄2 hours of performances and reports on New Year’s celebrations from around the world. YouTube will return as the presenting sponsor and will produce special content that will air throughout the show highlighting the top trends and stories from 2019.

In addition to Ciara on the West Coast, Ryan Seacrest will continue as host for his 15th year and lead the traditional countdown to midnight from Times Square in New York City, joined by co-host, Lucy Hale. “Dick Clark’s New Year’s Rockin’ Eve with Ryan Seacrest 2020 will broadcast live on Tuesday, December 31, 2019 beginning at 8:00 PM EST on the ABC Television Network.