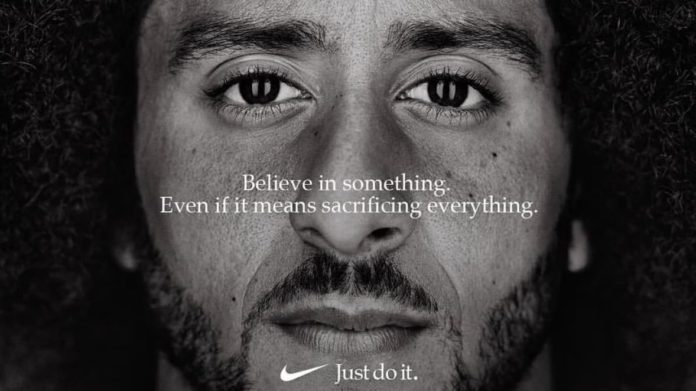 Nike warmed many hearts as they debuted Colin Kaepernick as the face of the 30th Anniversary for the Just Do It Campaign. Kaepernick has been with Nike since 2011 but this new wide endorsement will allow him to have his own branded line including shoes, shirts, jerseys and more.

Kaepernick is a former 49ers quarterback known for starting the movement to kneel during the United States national anthem to protest racial injustice in August 2016. After opting out of his contract with the Niners in March 2017 he was black balled by other teams which eventually led him to  file a collusion grievance against the league, which claimed he was being kept out of the league because of the protests he started.

The symbolic campaign slogan, “believe in something even if it means sacrificing everything”, stirred lots of conversation about Nike’s views on the NFL, if any and what other plans are in the works to make this more than just a popular marketing strategy on thier end. Some fear that Nike is not taking a stance against the NFL only appealing to a  movement in its height and social trending for its own personal monetary gains. While others feel this campaign is a direct response to the NFL’s recent anthem clause that allows players to stay in the locker room during the national anthem but fines players who chose to kneel.

Despite speculation Nike has a history of working with famous athletes  who have all been effective advocates for equality, and have been willing to participate in frank discussions about race; Serena Williams, LeBron James and Carmelo Anthony.

JaGurl TV commends Nike but would like to know what you think! Let us know in the comments.