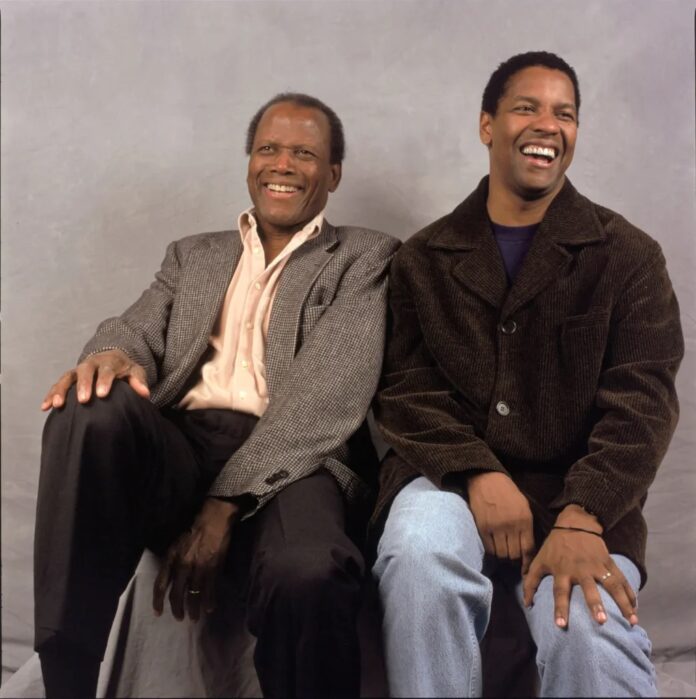 Denzel Washington speaks highly of certain people in the industry who has tremendously contributed to his career. One person who he will always speak fondly of is Sidney Poitier, actor and film director who was the first African-American and first Bahamian to win the Academy Award for Best Actor in 1964.

There has been comparisons between Washington and Poitier, which is a flattering compliment. The two has collaborated on projects in the past which contributed to the close relationship and similarities between the two. Due to their relationship, Washington commemorated Poitier after the legend died recently at the age of 94.

“Friend. Mentor. Confidant. Example. You know, father figure. Gentleman. Buddy. All of the above,” Washington said when describing the roles Poitier played in his life. and me,” Washington said endearingly during an interview with Yahoo Entertainment. Washington is not wrong as Poitier has been one of the most influential actor in history. He is most famously known for his roles as Homie Smith in lilies in the field (1963) and Virgil Tibbs in In the heat of the Night. “I think about him more now than I knew him,” Washington continued. “[I would stop by] the guy’s house and we’d sit down. Just seeing him in his pajamas and stuff, you know, I got to know him like that, like in his house clothes and walking around. And to hear him swear, I thought, ‘Oh, Mr. Tibbs!’ [laughs] You know, it sounds stupid, but those are the things you remember. … It’s like, ‘Man, I’m in Sidney Poitier’s living room!’”

Although Poitier has passed, his influence is still felt as a powerful force. Poitier had such an influence that he created friendly competition that pushed Washington. He went as far to say “I’m going after you, Sidney. I will always follow in your footsteps.” Although in the past Washington struggled with the sentiment that he was “the next Sidney Poitier,” he now lives in the truth of the impact of what his one actor has done for may careers over the course of time.