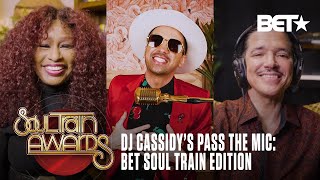 Nearly twenty plus legendary icons who appeared on the Soul Train Awards in the 1970s and 1980s were celebrated. The Soul Train Awards took place at the world famous Apollo Theatre in New York this year. DJ Cassidy shares his gratitude by expressing, “One year after partnering with BET to Pass the Mic in celebration of Soul, I remain more honored than ever to join forces with this iconic network to celebrate my musical heroes in honor of fifty years of Soul Train.”