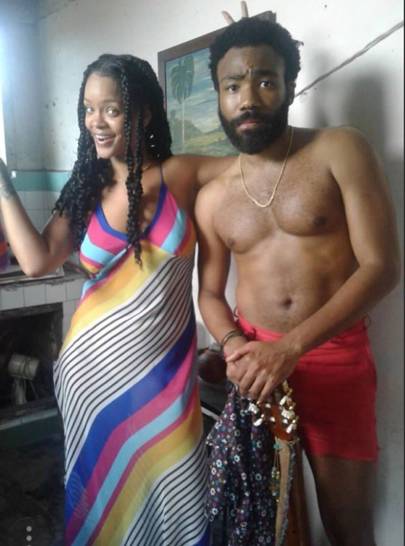 Donald Glover and Rihanna are hitting the big screen to co-star in a new movie rumored to be titled, Guava Island. Although there was a lot of secrecy surrounding the shoot, reports by Cuban music magazine Vistar, the two were spotted back in August filming for the new movie in Cuba.

Over the weekend, a fan caught the trailer of the mysterious film on camera confirming its existence during DG’s PHAROS festival in New Zealand and posted it to Twitter. The footage of the trailer didn’t include the title of the movie instead the trailer’s credits bill the movie as “A Childish Gambino Film.”  One thing it did confirm is that RiRi will be playing as Gambino’s girlfriend and partner in crime. Though Donald Glover has retired his stage name Childish Gambino musically, he will be acting under his stage moniker in the new film project.

According to IMDB the Hiro Murai– directed film will also star Black Panther’s Letitia Wright and Nonso Anozie. Murai and Glover have creatively collaborated in the past on projects such as his celebrated FX show Atlanta, and Childish Gambino’s “This Is America” and “Sober” music videos.

The release of the full length trailer for Guava Island is still to be determined but for now this short clip will do. Check out the intriguing teeny tiny movie clip below and tell us what you think!