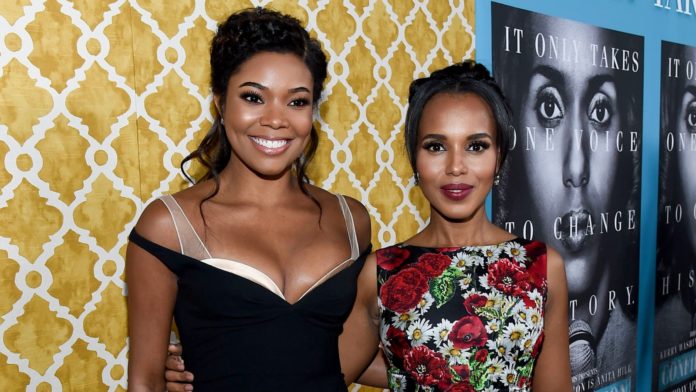 During the half an hour conversation, both actors explore the concepts of what Black liberation means for black mothers, the fear “embedded” in black motherhood, and the vulnerability in raising black children.

For Union-Wade, her definition of Black liberation changed as she began her journey with Zaya, Dwyane Wade’s transgender daughter.

“Being on this journey with Zaya really made me unlearn a lot of things and reexamine a lot of my ideas because I would have had a different idea of what Black liberation looked like a year ago” says Union-Wade. “Being on this journey and understanding there is no liberation if we do not center the most marginalized of us. For me Black liberation is being able to exist as you are, being able to self identify in peace, being able to live, love to prosper or fail in peace, and to still feel loved and protected and honored.”

Union-Wade states that one of the elements of Black liberation for mothers is healthcare.

Washington, a mother of 3, adds, “how about before that, how about reproductive rights? Do I have the right to family plan? Can I plan my family by having control of my uterus rather than have those determinations be determined by the state so that I can enter into motherhood at a time that is filled with my own sense of identity and goal and vision for my life.”

Union refers to famous tennis player, Serena Williams, and the complications during her pregnancy that almost cost her life.

“All the access and resources and privilege none of it helped her when her back was against the wall and she almost died during childbirth,” says Union-Wade.

As the conversation continues, Union-Wade opens up about how her own failure to conceive accompanied by constant public ridicule made her doubt her abilities to be a mother.

“I talk a lot about fearing that motherhood had rejected me, so when I finally became a mother to Kaavia James via surrogacy, just this fear of maybe it was natural selection and I’m not supposed to be doing this, and anything I was doing was going to be the wrong thing because I actually wasn’t supposed to be a mother.” says Wade “So trying to overcome those fears ….it makes you second, third, fourth guess everything you do. And a lot of that, just in this last year with Zaya, making me unlearn a lot of the ideas that I had about what it is to be a woman in this world and how you need to perform femininity and what that has to look like and just trying to not put some of the more oppressive, misogynistic traditions and cultural norms on these girls I’m raising. But it’s hard when you feel like every step is a massive failure”

Washington further explains, stating that “embedded in the idea of Black Motherhood is fear,” and refers to her former character Olivia Pope to clarify.

“When I got pregnant on Scandal, I begged Shonda Rhimes to make Olivia Pope pregnant,” says Washington. “And Shonda refused, she was like ‘nope, not Olivia Pope she’s not having kids.’ And really didn’t unpack that until I was in rehearsals for American Son. And I started thinking about this idea that you know, Olivia Pope was a kind of a Superhero and she was not supposed to have any vulnerabilities except for Fitz. So we couldn’t make Olivia Pope a mother of a black child because that would make her a more vulnerable human being. and we couldn’t allow that to happen to her character. That vulnerability is synonymous to parenting black children.”