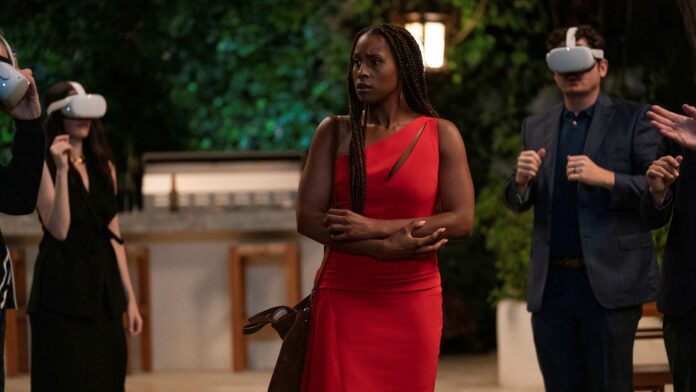 Jo-Issa Rae Diop is an American actress, comedian, writer, and producer. Many fans know Issa through her HBO hit series, Insecure, and its original Youtube origin series, Awkward Black Girl. Issa is back at it again, this time on Apple TV+ with her latest role in the premiere episode of Roar.

Roar is a “genre-bending” anthology series that humorously interconnects eight surreal feminist storylines. Produced by Nicole Kidman and Bruna Papandrea, the episodes approach and critique the intricacies of subjects and themes, including gender roles, autonomy, and identity.

The premiere episode, The Woman Who Disappeared, stars Issa as an upstart yet promising best-selling author who goes into a pitch meeting over marketing adaptation rights to her creations. Unfortunately, soon after Issa metaphorically and literally makes it into the room of majority male execs, the audience is subliminally immersed in her actively being ignored in all senses.

The debut episode sets a strong tone for the resonance of the series and is a must-watch equally for fans of Issa Rae and those that enjoy a cinematic meta-commentary on the state of the world. You can tune in with the all-star cast of Roar on Apple TV+ today.