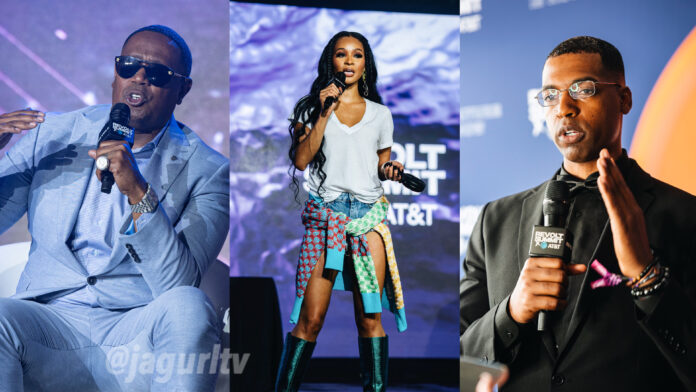 The annual REVOLT Summit x AT&T returned to Atlanta for its magnetic event full of live talks, panels, performances, competitions and your favorite REVOLT shows. The two day experience was hosted by social media personalities Pretty Vee and Fly Guy DC. JaGurl TV joined the attended to get the inside scoop of the whole event.

The Summit day 1 then continued with more panels such as a one-on-one conversation with Dennis Rodman titled Beyond The Rim who discussed mental health, The Future of Cannabis, where moderator Mouse Jones spoke with Bobby Shurmda, Al Harrington, Berner and The Cannabis Cutie on the booming marijuana industry that has historically boxed out Black Americans. REVOLT CEO, Detavio Samuels took the main stage to talk the Future of REVOLT. Attendees also tuned into Cancel Culture, featuring Amber Rose, Nene Leakes and Ray J and moderated by Jason Lee.

Sunday, September 25th picked up where the excitement of Saturday left off. The star studded event was full of can’t miss moments. It got REAL during DEAR AMERICA, RUN MY CHECK:  where the topic of reparations had the audience hyped up and ready to make a change. The panel included Van Lathan, Erika Alexander, Tariq Nasheed, Tezlyn Figaro, Killer Mike, Rizza Islam, and Kamilah Moore. REVOLT’s Signature event, BE HEARD, a music-focused talent competition aimed at giving everyone a shot at BEING HEARD, returned six young contestants. The contestants showcased their talents in front of the audience. Judges DJ Drama, Tek, Rapsody, and more, named upcoming singer and songwriter Bae Gii as the newly crowned winner who was awarded with the grand prize of $10,000.

Day 2 of the Summit also included insightful panels. This is in including The Future of Our Belief discussing the Black community’s evolving and complex relationship with spirituality. Next was Dear America, Run my check focusing around Black Americans believing that there should be some form of compensation delivered to the descendants of the American enslavement. Following up was The Future of Culture moderated by Bimma Williams, and Rap Radar including cultural commentators, Elliott Wilson (Tidal) and Brian “B.Dot” Miller (Complex, Spotify) interviewed Gucci Mane. Finally was The Future of Independence moderated by Wall Street Rapper and Maconomics host, Ro$$ Mac, which explored the future of independence, ownership and the evolving relationship between hip-hop and finance featuring Big Freedia, Guapdad 4000, LaRussell, and Lady London.