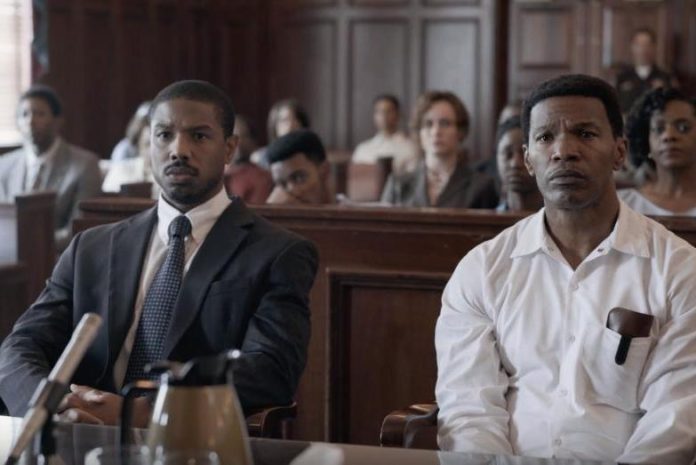 Just Mercy is one of the latest films that is bringing awareness of wrongfully accused men who have been railroaded by the justice system. The story follows Walter “Johnny D.” McMillian, who in 1987 was arrested for a murder he didn’t commit. He was then sentenced to death row by the Alabama legal system. His road to freedom began when attorney, Bryan Stevenson, came to his defense and represented him during his trial. During the process Stevenson experiences racism and legal and political backlash as he tirelessly fights for McMillian’s life. In the movie, McMillianis played by Jamie Foxx and Stevenson is played by Michael B. Jordan. In a sit down with BET Digital Jordan and Foxx discuss their mutual passion for starring in movies that raise awarenessof social injustice and how they believe we need more movies highlighting these stories to implement change.

In 2019 there were a catalog of films including  Just Mercy that brought awareness to social injustice and in 2020 Foxx hopes to see more. “We gotta get the word out. This is real, this is happening like it’s not enough films about them” says Foxx. “We experience sort of something crazy that happens to us everyday because of our race and there’s not enough films talking about these experiences and I hope we do more and not get fatigued by it, go see all of them”

Jordan agreed with Foxx on putting more films out about these experiences but he also believes it’s equally important for viewers to continue to support these films and use them as an educational tool for change. “We need to not try to normalize it either we become numb and desensitize over time because we see it happening all time” referencing the amount of injustice we see daily, “Like there goes another one, what’s next? but we have to keep the energy up and we can’t be reactive. We gotta be organized and proactive to certain things and about this conversation.” In the end Jordan believes that listening to these stories and understanding them will bring forth the change we hope to see. “Hopefully this is one like Jamie said that people won’t get fatigued with they’ll continue to want to see this through until something is put in place with some real change.”

Have You seen Just Mercy? Tell us what you think in the comments below