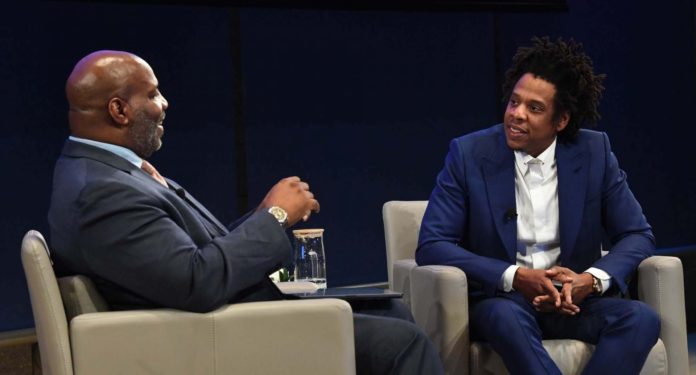 During the Super Bowl, Jay-Z and Beyoncé sat during Demi Lovato’s singing of the national anthem. To many it may have looked as if the couple was displaying a silent protest but according to the hip hop mogul, “it really wasn’t”.

A video of the power couple surfaced on Sunday after TMZ reported that the two did not stand as Demi Lovato sang “The Star-Spangled Banner” before kickoff Sunday night. But when asked at a Columbia University lecture series if the move was meant to display a silent protest, Jay-Z said it wasn’t. “It actually wasn’t — sorry,” he said, stating that if he intended to make a political statement, he’d say so. “I’d tell you,” he continued. “I’d say, ‘Yes, that’s what I’ve done.’ I think people know that about me.”

Jay-Z then went on to explain that they were sitting because they were discussing Lovato’s performance. “So we get there and we immediately jump into artist mode,” Jay-Z said. “Now I’m really just looking at the show. Did the mic start? Was it too low to start?” He added that “the whole time we’re sitting there, we’re talking about the performance, and then right after that, Demi comes out and we’re talking about how beautiful she looked, and how she sounds and what she’s going through, and her life — for her to be on the stage, we were so proud of her.”

The couple’s 8-year old daughter Blue Ivy was also in attendance and Jay-Z  say’s that’s another reason why he wouldn’t of choose that moment to silent protest, “Blue was right next to us, we wouldn’t do that to Blue and put her in that position.”

The national anthem has been a alienating issue in the NFL and politics ever since former San Francisco 49ers quarterback Colin Kaepernick began kneeling during the performance before games. Jay-Z, who has been a vocal supporter of Kaepernick, faced heavy criticism in the past year after his company Roc Nation announced a partnership with the NFL, which includes producing the Super Bowl halftime show.