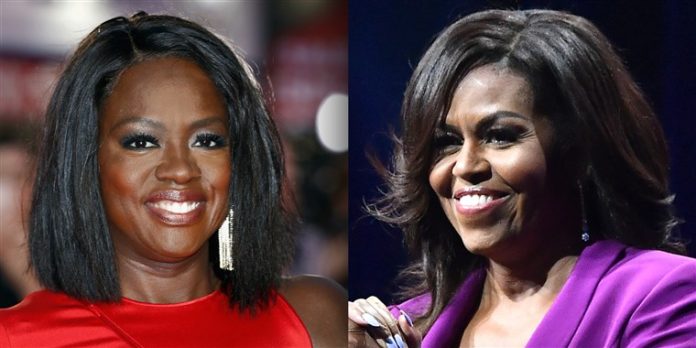 Academy Award-winning actress, Viola Davis, will depict Michelle Obama in a new series on Showtime. First Ladies, a one-hour drama, will focus on former first ladies of the United States. The series will highlight Elanor Roosevelt, Betty Ford, and Michelle Obama. It will give viewers a glimpse into their personal lives as well as their political involvement. The show will be executive produced by Davis’ husband, Julius Tennon who stars in American Koko, and was written by author Aaron Cooley. Davis took to social media today to announce her excitement for the project.

Davis is the CEO of JuVee Productions, who is the company that developed the series. The series will explore moments “set in the East Wing of the White House, where many of history’s most impactful and world changing decisions have been hidden from view, made by America’s charismatic, complex and dynamic first ladies.” according to the Hollywood Reporter.

LionsGate Tv Tweeted, “East Wing, here we come. Excited to share that First Ladies, starring @violadavis, is coming to @showtime! Showtime president of entertainment explained how the spouses of former Presidents have influenced the country’s history. “First Ladies’ fits perfectly within the Showtime wheelhouse of drama and politics, revealing how much personal relationships impact both domestic and global events. Having Viola Davis play Michelle Obama is a dream come true, and we couldn’t be luckier to have her extraordinary talent to help launch this series.”

Davis, known for her role in The Help and How to Get Away With Murder, will play Mrs. Obama in the first season. Her role on HTGAWM will end this spring after 6 seasons. The roles for Eleanor Roosevelt and Betty Ford have not yet been casted. According to The Hollywood Reporter, Showtime is eliminating several shows including Shameless and Ray Donovon which ran for 11 and 7 seasons respectively.

Davis is an Emmy, Golden Globe and Oscar-winning actress & philanthropist. She has actively given back to her community in her hometown of Rhode Island and collaborated with the ‘Hunger Is’ campaign to eradicate childhood hunger. She uses her many talents to touch as many people she can in an impactful way.

The show is set to premiere later midway through 2020.