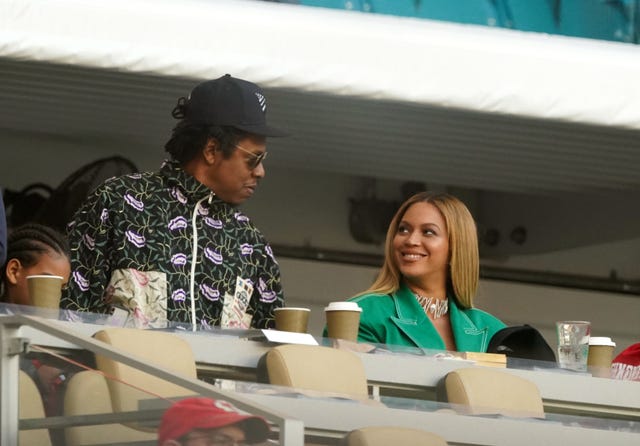 Jay Z, Beyoncé and Blue Ivy Carter decided to remain seated during Demi Lovato’s performance of the national anthem at Super Bowl LIV. TMZ reports that the Carters were sitting together a few rows back from the field and made no attempt to get up during Lovato’s performance.

Although Jay-Z received backlash for signing a deal with the NFL while Colin Kaepernick was being blackballed by the league, it looks like he is still supporting Kaepernick’s efforts to stand against police brutality.

The rap icon’s company Roc Nation partnered with the NFL on its entertainment sectors and Inspire Change Initiative. The partnership was created after an agreement with a group of players who demonstrated during the national anthem to protest social and racial injustice in the U.S.

Since the partnership, Jay-Z has been vocal about what his hopes are for this partnership. The business man recently spoke to the New York Times to make clear that the partnership was not made for economic gain, but to promote education surrounding police brutality and not to discredit Kapernick’s efforts, “As long as real people are being hurt and marginalized and losing family members, then yes, I can take a couple rounds of negative press,” he said on the backlash he received from the partnership.

“No one is saying that he hasn’t been done wrong. He was done wrong, I would understand if it was three months ago, but it was three years ago and someone needs to say, ‘What do we do now-because people are still dying?’”