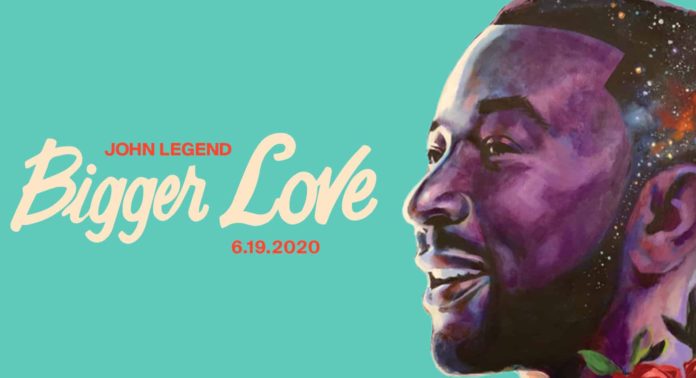 Singer, songwriter and 11-time GRAMMY Award-winner John Legend released his seventh studio album entitled Bigger Love. Something Legend says the world “needs”, amid the nationwide protests in honor of George Floyd. “During these painful times, some of us may wonder if it’s ok to laugh or dance or be romantic.” says Legend.

The multi-platinum recording artist also said during this trying time it is important for black individuals to be seen as human. “Lately, the images of black people in the media have been showing us with knees on our necks, in mourning, or expressing our collective outrage.  We feel all those emotions. But It’s important for us to continue to show the world the fullness of what it is to be black and human. Through our art, we are able to do that. This album is a celebration of love, joy, sensuality, hope, and resilience, the things that make our culture so beautiful and influential.”

Bigger Love, the 16-track album is a mixture of Pop-Soul, and R&B. The album features collaborations from Gary Clark Jr, Jhene Aiko, Koffee and Rhapsody.

Amid the release of his album, the singer will be hosting alongside Alicia Keys a Juneteenth special Verzuz episode airing tonight.

In addition, Legend will be performing songs from the new album during his Father’s Day special John Legend and Family: A Bigger Love Father’s Day,” which is airing Sunday, June 21 at 8 pm ET/PT on ABC. On June 25, Legend also plans to hold a Bigger Love concert experience collaborating with Wave and benefitting Let’s Free America, an organization created by Legend to transform the criminal justice system.

Upon the release of the album Legend wrote a statement to his fans saying, “I’m under no illusion that music can save the world or solve the world’s problems, but I’ve always turned to music to help me through tough times and I know many of you have done the same.  That’s why I couldn’t wait to release this album to the world.  I debuted in 2004 with an album called GET LIFTED.  And now, as we enter the summer of 2020, I hope this new album can get you lifted again, fill your hearts with love and inspiration, give you something to dance to, something to hold hands to, something to make love to.”

The album is available now on all streaming platforms.