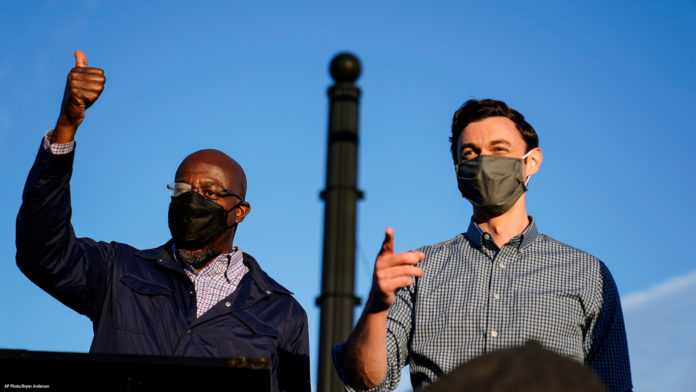 The democrats win has balanced the legislative body 50-50, therefore Vice President-elect Kamala Harris has the pivotal role as tie-breaker.

With Ossoff’s projected win, Democratic Vice President Kamala Harris will be the tie-breaking vote in the new Senate that is split 50 Democrats to 50 Republicans. https://t.co/KjUGN77KG8 pic.twitter.com/mvo5UpOKV5

Control of the Senate will give incoming President Joe Biden the ability to implement his legislative plans without resistance.

Ossoff thanked voters and supporters in a video, he shared on Twitter.

The news of the Democratic win came to light amidst the chaos of a violent mob of Trump supporters descending on Washington. President Donald Trump employed his supporters to storm the Captial building, where the congress sat counting electoral votes. Following his instructions, the peace protest supporters quickly turned into a mob.

The mob stormed the Captial building, which forced Vice President Mike Pence to be evacuated. Congressmen and women hid in rooms as the rioters raged through the federal building, vandalizing and looting items.

The national guard was dispatched to regain control. As of now, the violent day on Washington has left 4 dead, 52 arrested, and 12 police officers injured.

Ossoff quickly took to twitter to speak out against the attack on the capital.

Today’s insurrectionist attack on the U.S. Capitol was incited by Trump’s poisonous lies & flagrant assault on our Constitution.

The GOP must discard and disavow Trump once and for all, end its attacks on the electoral process, & commit fully to the peaceful transfer of power.